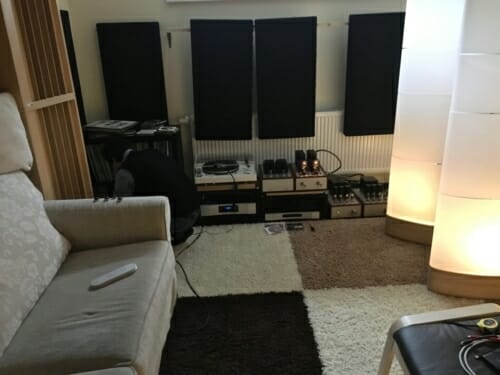 Always great to hear how to improve your sound. And, it is merely loudspeaker positioning that is the answer.

Unfortunately, it does take years of experience to understand how to enhance the music so that I will give you a good insight.

Listening and testing take years to know exactly where to place the loudspeakers. And, have written this “How to improve sound ” article to help you understand. It is easy to do but what a difference it makes by positioning and repositioning those loudspeakers.

The system I am writing about set-up in Vilnius, Lithuania and the loudspeakers made by “WOLFVONLANGA” open baffle design

The article will describe some of the faults I found in the original Speaker system set up, and also the corrective steps are taken. Initially, the sound had a score of 5/10, but after the adjustments, we finished with a score of 10/10. The system had been running and burning in for a month. And, was invited over to my friends to listen and tell him what I thought of the sound. 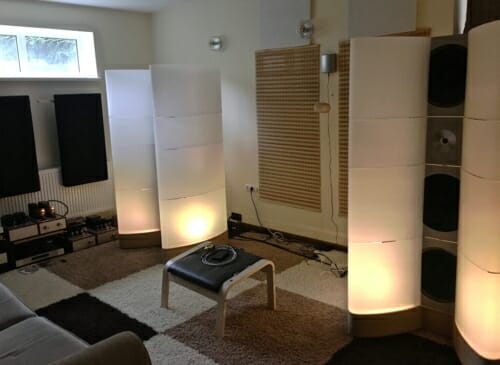 I took this picture as I entered the listening room, used as a reference for making any necessary adjustments.

The loudspeakers were large and looked so impressive with the design and construction. I liked the look and the feel of everything and was expecting to be literally “blown away” with the sound!

The music coming from the system was nothing like I expected to hear in any way, shape or form. My friend told me he had carried out tests using his computer “set up” and was interested in listening to my thoughts.

The sound I heard was completely wrong and was way out of balance. The bass was booming and overbearing. The vocal appeared from two-thirds of the way up the wall. Nothing was happening in the middle of the sound stage.

The details were just appearing from the far walls, and there was no feeling whatsoever in the music. The sound was lifeless and flat without expression. Also, it was apparent that when a note played, it was quickly cut off.

After the CD finished, a Rod Steward LP on the turntable. And, done to let me hear how vinyl sounded in the system. When I listened to the sound, my words were “Rod what has happened to you?” Why did Rod seem so thin and was half-way up the wall! 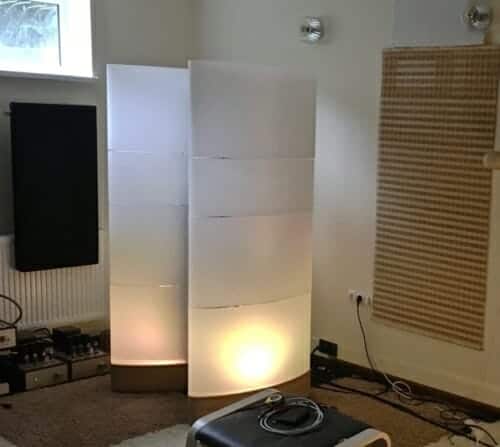 The first task was to move the speakers 25 centimetres nearer to the rear wall and 25 centimetres closer together. Luckily the units were on wheels and easy to carry and also the initial position I chose turned out to be very good.

I want to point out sometimes it is only necessary to move a loudspeaker just a few centimetres. And then fine-tune by moving just a centimetre or even a half centimetre.

One of the things I found necessary was the small adjustments that were needed because the open baffle had a critical change in the sound direction, which was a significant player in how to improve sound quality!

By moving the toe-in angle on the loudspeakers a minimal amount, it was possible to have the vocals exactly where they should have been, and this was “centre stage”.

The loudspeakers had to have a tiny toe-in. Which, was about one centimetre off centre which was enough to make the sound dispersion correct.

Such a small move made such a big sound difference and it was well worth the effort and we were both very pleased at the result!

The initial adjustments completed. And we took it in turns to sit in the listening position to hear the results. A few more small changes made, and the system started to sound great. The bass was tight; The vocals were centre stage and the sound-stage excellent. The system was now up to 9/10. But something was not sounding quite right. If you remember, I said the notes seemed to cut off, and there was an absolute lack of life to the music.

At this point, we decided to try different cables to see if there would be any difference in the sound. My friend took a set of interconnects and loudspeaker cables (which were the new 1.3-meter Interconnect and the new 5-meter speaker cable he received only a few days earlier) from his Tannoy system and connected them up.

The result How to improve quality

I am impressed with my cables because it was that was needed to bring the system to life! The music was now alive with feeling and presence. My friend put on Rod again just to hear how he sounded. Rod was real as if he was in the room with us and the sound we heard was now a full 10/10! 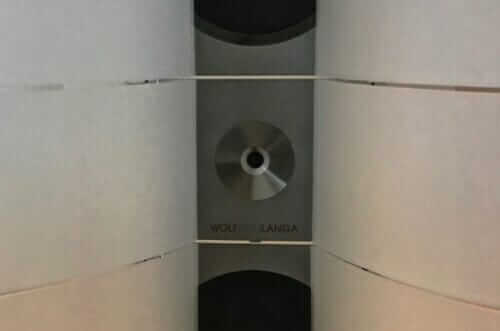 Everything sounded great, and I even found myself singing along with Rod as the harmonies came in! They say there is a first time for everything and I think the sound from the “WolfvonLanga” system got into me!

And, is amazing at what you are able to do when you put your mind to it!

How to improve the sound quality of your system can be addressed in just two ways.

The first step is to reposition your loudspeakers. And, something often overlooked and people spend thousands on their systems. And, are not getting the full enjoyment often, because they have heard about the importance of this necessary procedure.

The second step is to use audio cables suited for the purpose. Meaning, the wires are transparent and does not add or subtract from the original signal.

If you have enjoyed ‘How to improve your quality’, please share with friends – thank you.