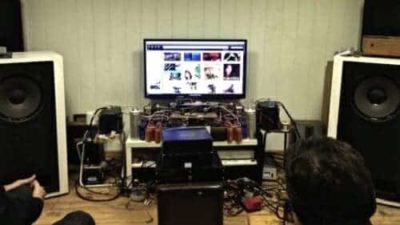 I am living in Vilnius, Lithuania. And, very fortunate to meet people who have the knowledge and talent to build beautiful audio components. Also, I was told the power-amps and pre-amplifier were made by the gentleman who owned the system. And the gentleman was from Russia. Also, he was interested to hear my opinion of his system. And what could be so hard in that?

Sometimes when I go to a listening session, I just never know what to expect. And, as it turned out, this was an audio experience never to forget. I arrived as agreed, and met by my friend who showed me into the listening room. Also, three other audio friends were present. Including, the owner of the Tannoy Red loudspeakers.

The music was from computer to DAC. And then the signal fed to a pre-amp and a pair of Mono-blocks. The pre-amp and Mono-blocks were hand-built, using components of the highest quality. And, I could see, no expense had spared on this Tannoy Red project.

The Mono-blocks were a beautiful creation. And, I was impressed by the quality and size of the components used. Also giving a clear indication the owner loved what he had created. And, the owner was pleased we had come to listen to his accomplishment.

The loudspeakers were Tannoy 15″ Red monitors fitted into Lockwood audio enclosures. And, were in excellent condition. Lockwood Audio is a company who specialises in the manufacture of loudspeaker enclosures, having many years of experience. Tannoy Red.

At this point, I have to say every person hears things differently. And, as a result, focus on the sound they prefer. One person will pay attention to bass response and depth of the bass while another person will be more interested in the upper frequencies. Also, every person thinks their system is the best, which is because they are used to their system sound.

I am lucky to have friends who have a passion for music. And, are all professional people, who like me have been involved with audio all their lives. But, for some bizarre reason, I am referred to as ‘The Expert’. And I do not know why. But, maybe it is because I am English and my opinion is valued. And, whatever I say, is always agreed upon in the end! Tannoy Red

As I said, earlier, every person believes their system sounds the best. But many people are unaware of speaker positioning and how critical it is. And, as I listened, to the first few bars of music, I am sorry to say I shuddered. The sound was harsh in the middle, lacked focus, and just wandering around the room. And I asked the owner if he would allow me to move the loudspeakers, knowing it would make the system sound better.

The owner told me it was hard to get a good sound because the room was small. Also, there were lots of reflections. But I was more than welcome to try. For me, it was an easy fix. And I measured the speaker’s centre to centre distance. After, I measured the back wall distance. And, made the nI necessary adjustments. Ten minutes later, the system sounded different. And everything was in place, focused and the harshness gone. At this point, one of my friends was surprised. And, said, he never thought by repositioning the speakers the actual harshness could be improved.

The result was excellent. And, showing how the system sounded. Also, just how good a pair of mono-blocks can be. Everything was there, as you would expect in the way of detail, space, dynamics, bass and sound stage.

The Tannoy red loudspeakers performed so well. And bringing out everything the system could offer. However, a couple of issues became apparent. The first was the bass had a touch of bloom around the bottom end. But, it could be fixed by putting a carpet on the floor. Also, the system was still a touch on the stiff side and lacked the musicality that one would expect from tubes. But, again, this could be easily fixed or fine-tuned by using a different interconnect cable and power cord.

I was asked by my friend to bring a set of cables with me. Just to try if necessary. And, he asked the owner if it was ok to try them.  And to cut a long story short, I fitted a pair of three-meter loudspeaker cables.

We sat back and listened as the cables warmed up. The owner jumped up and said in Russian just how good the system now sounded. And, never knew a cable could make such a difference. Also, we were able to hear just how magnificent the Tannoy Red Loudspeakers sounded!

If you have enjoyed ‘Tannoy Red loudspeakers tested,’ please share – thank you.