The Arcam SA30, Class G Intelligent Integrated Amplifier. And, sounds like something from ‘way into the future’. But, after looking and listening, I will say. The Arcam SA30 amplifier is certainly a big step ahead in the market place. And, I enjoyed the fact, the amplifier does everything necessary for total convenience.

The Arcam SA30 amplifier and designed with the latest cutting-edge features. Class G, expertly implemented. And, the highest resolution of audio support presented. Also, simple streaming is available with a mobile device. And, using the native app of choice via Apple AirPlay2 or Google Chromecast.

The SA30 features a full MQA decoder, which enables you to playback MQA audio files and streams. Whilst delivering the sound of the original master recording in the highest possible sound quality. At this level of playback, you hear what created in the studio. Which, gives, precise file and platform-specific DAC compensation and management.

Mr Lukas Svedas, the owner of “Garso Namai’, invited me to test the Arcam SA30 amplifier, owner of ‘Garso Namai’ audio saloon. And, located in Kauno g. 31, Vilnius. The day was icy, but I was too excited to think about the cold. As all I could think about was what to expect for the SA30.

walked into the showroom and heard the music playing. And, I thought it sounded excellent and could hardly wait to remove my coat and adopt my listening position. I could see the loudspeakers used were the Acoustic-energy AE520 series. I listened to these loudspeakers last week when they first arrived. And, now a week later, were on their way to becoming better sounding. I think we all are frustrated by the time it takes for a loudspeaker to ‘bed in and open up’. But, that is just part of the audiophile life and something we learn to live with it.

Arcam SA30 amplifier has terrific specs and beautiful features. And, actually can do everything a person needs to do because it is a self-contained unit!

I sat and listened to the music and was immediately impressed. Lukas played three tracks, and I heard sounds from everywhere. It appeared, the Arcam SA30 amplifier, somehow enabled another layer of sound. Also, the expanse of sound had reached a new height, which I loved.

The bass, reached a new level, having greater depth than before. The midrange was beautiful. And, the upper frequencies were in another class. At this point, I wondered was the Arcam SA30 amplifier that good. Or, was it the Acoustic-energy speakers bedding in!

I shared my feelings with Lukas and explained how to improve the sound. Lukas agreed with my comments and so decided to change the Van-den-Hul power cable and speaker cables, to Perkune reference cables. I know when testing a person must perform testing with high-performance cables. And, by doing this, will reveal the true nature of the component tested.

The first step was to change the power cable and to listen to the changes. And, after the results, the speaker cables changed. But, it was hard to imagine, just how, and how much, the sound improved. 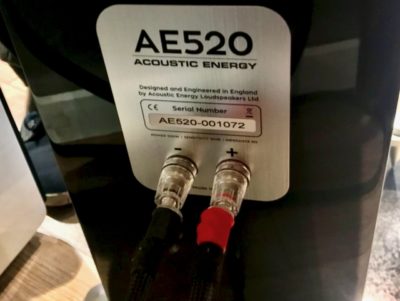 The next step was to change the loudspeaker cable, which only took a few seconds. The same music played, and immediately we heard even more changes in the music presentation.

I wish you could be here to witness the changes and to hear how good this amplifier is. The bass was sounding even better, and now showing the tones of the bass strings as the music played. The Vocal became as smooth as liquid gold, allowing for the sound of breath in-between her notes. And, total clarity and it was so beautiful to hear how her voice sounded.

The soundstage had increased to the extend which I had never heard before. And, it was as if we were sitting inside a pair of headphones. An experience as never heard before and was as if the sound was even more extensive than the listening room. The detail and micro details had also improved, and it was just a hugely uplifting experience for both of us.

The Arcam SA30 amplifier is something special but can only have high-quality loudspeaker cable and power cable. The amplifier is terrific in every way and must be the best value for money in the audio industry. The overall amplifier performance had increased from 7/10 to 11/10 because it is that good. But, you do need to buy the high-quality cable that matches the high quality and performance this amplifier can give you.

If you have enjoyed reading ‘Arcam SA30 amplifier’ please share with friends – thank you.