Also, my friend’s friend had power-amps and a preamp he had made. And all I had to do, was close my eyes, sit back and listen. So what could I say to that? Apart from a big fat YES!

The meeting was in a motorcycle repair shop. And at the back of the shop was the listening room. Sometimes when I go to a listening session, I never know what to expect. But, as it turned out, this was an audio experience never to forget. I arrived at the garage and called my friend, who came to meet me. Also, I met three of my other audio friends, who had been invited, and the owner of the Tannoy red loudspeakers. I said hello, we shook hands and then sat down. The music began, and we started to listen.

The music was being fed from a computer and then to a DAC. After which, it was sent to a preamp and then to a pair of Mono-block amplifiers. The preamp and the amps were hand-built using the highest quality components and were terrific in appearance. Also, the components used were the biggest I had ever seen, and I was so eager to hear the sound from this system I was shaking with excitement and could hardly wait to hear the music!

The Mono-block amplifiers were just a beautiful creation. And the owner was so proud of what he built. Also, was pleased we came to visit to listen to his accomplishment. But, the thing that struck me was that everything had been made so simple. And it was easy to get. Also, precisely the right amount of components was necessary to make the system sound the way it did. The amplifiers ran cool to the touch and had no sound to them which was the perfect way for them to operate! 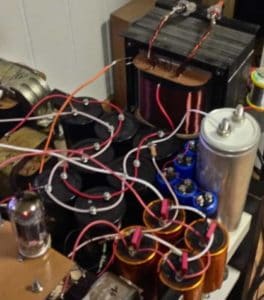 The amplifier was quite amazing to see. And I was impressed by the quality and the size of the components used. Finally, I indicated that the owner loved what he created and knew what he was doing.

I am thankful for this meeting. It is good to meet such a person and see what he can do with components. I am living in Vilnius, Lithuania. And, I am fortunate to meet such people who can build such a beautiful piece of equipment. Also, something to be proud of and in this case, it was indeed something special. 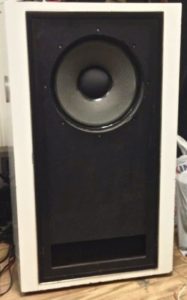 The loudspeakers were Tannoy 15″ Red monitors fitted into the famous Lockwood audio enclosures. Which were in excellent condition, I might add. Lockwood audio specialises in the manufacture of loudspeaker enclosures, having many years of valuable experience.

And I am a Tannoy red loudspeaker lover, and I consider Tannoy to be among the finest manufacturing quality Loudspeakers. I have had many different Tannoy loudspeakers over the years, working with audio and audio systems. And prefer the sound from a 15″ monitor above anything else manufactured. 15″ Tannoy Red loudspeakers

I have to say at this point, every person hears things differently. And, people tend to focus on the sound they prefer. One person pays attention to the bass response. Another person could be more interested in the highs and ultra highs. Also, to every person, their system is always best. And, this is because they are used to the sound of their system. I am lucky to have good friends who have the same passion for music. And, are all professional people who have been involved with audio all their lives like me. But, for some strange reason, I am referred to as ‘The Expert’. Why this is, I do not know. But, maybe it’s because I am English and they value my opinion. Because whatever I say is always agreed upon! 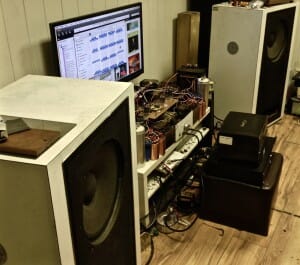 As I said earlier, every person believes their system sounds the best. And, people are unaware of speaker positioning and how critical this is. So, as we listened to the first few music bars, I shuddered. The sound was harsh in the middle and lacked focus. And the sound was wandering around the room. So I asked the owner if he would allow me to move the loudspeakers. As I could make the system sound better. The owner told me it was tough to get good sound because the room was tiny.

And, also there were lots of reflections, but I was more than welcome to try. And for me, this was easy to fix. First, I measured the speakers centre to centre. Then, I measured the back wall space and made adjustments. Within twenty minutes, the system sounded different. Everything was in place, focused, and the harshness had gone from the music. At this point, one of my friends said he was surprised. Because by repositioning the speakers, the anger in the sound had gone. And, for him, it was a great learning experience! 15″ Tannoy Red

The result was the system sounded excellent. It showed just how good a pair of monoblocks could sound. Everything was there, as you would expect in the way of detail, space, dynamics and bass. Also, the sound stage improved, and the Tannoy red loudspeakers performed. However, there were still a couple of issues. 15″ Tannoy Red loudspeakers

The first was the bass had a bloom around the bottom end. But, it could fix by putting a carpet on the floor. Also, the system was still a touch on the stiff side and lacked the musicality that one would expect from tubes. And, again, it could be easily fixed or “fine-tuned” by using a different interconnect cable and power cable.

Before the meeting, my friend asked me to bring a set of cables with me to use if necessary. I asked the owner if it was OK, and he gave me the green light. And to cut a long story short, I fitted a pair of three-meter loudspeaker cables and a pair of 1.5 meter interconnect cables. And, happy to announce what a difference they made to the sound at the loudspeakers, which was now sensational!

If you enjoyed ’15” Tannoy red loudspeakers’, please share with friends – thank you.