The Power of a cord. I arrived at my friend’s house and greeted with a warm welcome. As I entered I could hear the familiar sound of his system, but now it sounded much better, and I said: “man that sounds good” So many things have happened since I saw my friend and I had a much better understanding of his requirements!

As we entered the lounge, I could see why, because there sat a new pair of Tannoy Kingdom Royal loudspeakers.

“Well, what do you think,” my friend asked. I replied that I thought it sounded much better but needed a tweak. My friend said he felt that is what I would say. At this point, the doorbell rang, and it was his friend, who had come to witness the next step in the setup operation.

We shook hands and spoke about the new Tannoys and how much better everything sounded, but told they were only on approval just to test. I got to work straight away, and after about half an hour, had the system set up and sounding great. Everyone was pleased with the improved sound as the Tannoys now sounded great.

Now it was time for a good old cup of tea as we listened to some of the test music that my friend prepared for the next step of the operation.  I had told my friend about my cables and what I was doing in Lithuania, and he was very keen to hear exactly how they sounded. I have to mention at this point that I only had the power cords as I was still working on Interconnects and Loudspeaker Cables. 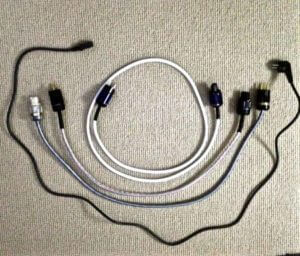 The idea was elementary, which was to test my power cord against the power cords that my friend already had and to hear what the difference was.

To make things a bit more interesting, my friend said that he was going to use one of the cables twice and by doing this he hoped to confuse things. I said not a problem as I know what to listen.

The cables were tested one by one and used on the source machine. We were unable to see the order of the audio cables because were positioned in such a way that a chair hid my friend from our view as I think he wanted to prove that his cables were better. My friend paid good money for his cables. And, of course, there was the element of pride to be considered.

The music played and the first cable tested, and we wrote down our comments and gave the score as we had agreed. It was now the turn of the second cable, and we went through the same process and got the results. We continued in the same manner for all the cables, and as I stated earlier, we did five tests, but there were only four cables.

Now it was time for the results. And, we all came together to compare and to see how things had fared. The price of the cables started at 20 pounds, the next was 225 pounds, and the next was 785 pounds and finally 1500 pounds—quite a range to cover so you would naturally expect to hear a big difference. And, indeed we had listened to a difference in the cables. But, the scores were the same from all of us, which was amazing!

A great test and everything completed as well as we could, and the results were excellent, and we were delighted. The next step was now to bring out of hiding another power cord that I knew nothing about as my friend was keeping it as a surprise. Ok so in went the new power cord which cost 2250 pounds was marked in the same way. This cord scored 10/10 and sounded better than the rest in every way. And, so that concluded out tests of the power cords.

The next thing we did was to replace the main amplifier power cord with the 2250 pound power and listen to the sound, and yes, it was an improvement in every way. The next step was to remove the other power cords from the system and replace them with my power cords because yes (hate to say it ) but mine were the winners in the test. Now we sat and listened, and we could hear what the kingdom royals sounded like in a word breathtaking.

This article, written five years ago when we were in the initial stages of introducing cables into the market place. Since then, we have developed and tested Interconnect cables and Loudspeaker cables and have many reviews and all positive customer feedback. The name of the product is Perkune audiophile cables. Please read

If you have enjoyed this Power cord story, please share with friends, thank you.