The Ferrari and my first was red!  It was 1970, and I lived in the United Kingdom in a small village called Acle. I was always messing around with cars and just loved them (as most of us did in those days). A friend of mine owned the village garage, and so I was always helping him. And, also doing things to the cars that I was repairing.

One day my friend John called me on the telephone and asked if I was coming over because he wanted to show me something interesting. We met at the garage and then drove out to visit his friend, who was a farmer. John would not tell me what we were going to see and just kept saying be patient you will be glad you came. We met his friend, and he took us to the barn which, was full of tractors but in one corner at the end was a car under a tarp. When the farmer took the cover off the care, it was a Ferrari 330GT in Red with blue leather interior.

I just stood there completely in shock just speechless. The farmer went and got a set of jump leads and connected them to his truck and then to the Ferrari. Meanwhile, John has turned the engine over using a spanner on the pulley. Also, primed the carbs with petrol and the fuel pump. The farmer revved his truck, and John turned the keys, but to my surprise, the Ferrari spluttered into life and what a fantastic sound it was. 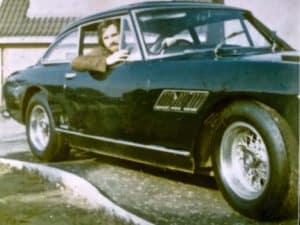 The Ferrari was just unique, and we took it out for a quick spin around the country lanes and then back to the farmer to find out what he would accept for the Ferrari.The next day we went to pick up the Ferrari and brought it back to Johns garage for inspection. We made a list up of things needed to make it ready to pass the MOT test, but I decided that I wanted to give the car a colour change.

John said that I was crazy because Ferrari must be red and not blue, but he said it was my car and he would help. While we waited for the spares to arrive from London, I got out the wet and dry paper and started to rub-down the Ferrari in preparation for the respray. Which took far longer than I expected because it had to be perfect, but as you can see from the pic, it turned out beautiful.

I ran the 330GT for about six months and had so much fun with it. I felt like the lord of Acle every time I drove, and the sound was music to my ears. The Ferrari would reach 155 miles an hour without any problems, and it was stable and smooth, and I will always remember this as long as I live.

A few years had passed, and it was now the eighties. I had taken a position with a new company just starting in the oil and gas industry, and I was excited to move over to the other side of the world to see how different Canada was. I was living in Alberta, Canada but I still had the passion for Ferrari and so decided that I would look for something else because tired of driving the company truck around. I found this beautiful Ferrari 308 GTB in perfect condition with only 12,000 Klms on the speedo, and it had all the history so was an excellent find. I decided to do some work to it and changed all the electronics and cables, and plug leads, gaining myself another 35 BHP, which made quite a difference. I also had some work done on the engine at in the evening the exhausts would glow red with the power that the engine produced.

I was a member of the corvette club in Canada, and it was a great group of guys all crazy about their corvettes and some of them were so fast it was just amazing to see them in action. I was welcomed to the corvette club even though I did not have a corvette because they all thought it was great to have a blue Ferrari in the club. We had decided to go on a road trip, and this would be a ten-day event. We all had the CB in the cars and could talk to each other, so it was a bit of fun. The plan was to drive from Canada to Mexico down the coast route and then travel back through Houston. The trip was amazing with so many stories, but I will tell you one.

I had decided to try out my Ferrari just to see how fast it would go and I did this on a tranquil stretch of road, and some of the guys were in front a few miles ahead watching for traffic, but the coast was clear, so it was pedal to the metal and off I went. I did not know there was a helicopter on patrol and called to the two cars ahead. I was showing 168 MPH, and I got a call on the CB to tell me that a police car was heading my way, so I slowed down to average speed, and after thirty minutes I hear a siren behind me and so pulled over just as a car came from the back and also another from the front.

Well, I got out, and the policemen said to me, do you know how fast you were going? I looked at them both and said well, I was going soon. I know because I had done some work on the engine and wanted to see how it performed. At that point, they both became interested in what I had done to the car and could they have a look, please. The policemen were great, and so they both had a drive and posed for some pics and just said that it was all in a days work and have a good trip back to Edmonton.

It was a few years later, and I was living in Odense, Denmark and what a beautiful place it is. I had become friendly with many people and was a member of the Danish Ferrari group. I was loving my Dino 246GT which was like new having only 5,286 miles on the clock. I attended events and meetings and even made a trip to Nurburgring and attended a three-day event, learning how to go around the track without coming off.

Everything sounds easy but at speeds of up to 200 MPH takes a bit of getting used too. There is one thing that I love about a Ferrari, and that is the sound of the v12 engine. When it is ticking over or whether it is on the full song because it is am fantastic sound.

I was able to upgrade to a beautiful 365 GTC. And, it was one of the best sounding Ferraris that I ever owned. I think I have owned about seven Ferraris over the years. From the Dino 246 GT right up to the Testarossa but they all have their appeal and are all very different, a bit of the fairer sex as they all have their personality. I want to say Ferrari is a fantastic machine. And I have had so much fun in Ferraris. But, what about all the Porsches I have owned? Yes, I think that will be for another blog.

What does this have to do with my audio cables? Well, it is all to do with sound and noises as my life filled with different sounds and different noises. I have learned to adjust the carbs by just listen to the amount of suction, and so my listen senses are very acute. And, this is why I can make by cables sound as they should!

If you have enjoyed ‘Ferrari and my first was red’, please share with friends – thank you.