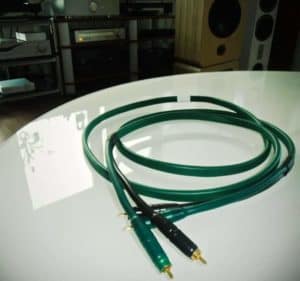 Interconnect review Ludwig Hegel “For many audiophiles; this may be on the end of the search for the optimal sound” This was the end quote by Ludwig Hegel. Paul Goodwin emphasises that the cables represent such a high level of technical sophistication to the sound, a more expensive line is not needed. In other words, the wires produced by Perkune can optimally bring, show and highlight tones, with even the most costly hi-fi, for they are selected and built, it will fit perfectly and complement almost any sound.

“There are many cable companies who produce and sell audiophile cables. Everyone says that their cables are the best, so why should you believe that my cables are different. That’s what annoys me in audio, a huge amount of money that ignorant people are willing to pay for the so-called. Cables “high-end” in order just to gain only a slight increase in sound quality. And cable “high-end” can cost more than the hardware on which used. I decided to create a cable that will offer performance at the highest level of sound quality, but at a lower price. My goal was to introduce such wires on the market.”

The two cables are wrapped everyday dark green shirt with PVC, only the ends (about 10 cm) interconnect are split and covered with black or green T-shirt, as part of the gripping pins. Plugs come to a reputable manufacturer – from Neutrik with Liechtenstein. In a central location (the centre), interconnect placed a sticker that says “Perkune” and indicating directional cable. The cables are solidly and aesthetically. It seems that they will be able to conduct electricity for life. More there is nothing to describe because the manufacturer does not disclose the anatomy of the cable.

The Interconnect I used was mainly as a combination of DAC Musical Fidelity MX – DAC amplifiers. Audia Flight FL Three S, Audio Analogue Puccini Anniversary, Pathos Classic One MKIII and Hegel H160 ), or as a combination of phono Trilogy 906 and Musical Fidelity MX – VYNL with the same amplifiers. A full list of associated equipment is available at the end of this text.

Perkune interconnects characterised as primarily highly transparent, pleasantly neutral sound with a smooth and light texture dressed in rhythm and tonal control. The whole message is stable, balanced and coherent, you can write – laminar, which kind of flows in parallel layers, with no interference between them. They have an advanced sound effect on the proper portraying. Spatial phenomena as precision and wide stereophony. Reliable focus virtual sources – their physical tangibility, clarifying, visibility.

Guide without problems shows a complex resonance of instruments, it emphasises the contours of the sound, filling single and serial tones. Is felt complement the background density of the substance tone, opening the nuances, etc. It is clean and clear sound saturated with detail, complete with reverb and depth. It is worth noting that the Lithuanian interconnect opens the sound allow to sound full breast and breathe freely without interference and with full potential. It is a catalyst sound natural and at the same time, emotional – operating with the senses, the manager of the feelings.

Another strong point is that Perkune interconnects expressed midrange. The diameter is thick but is communicative, directly and naturally. The sound of the instruments of the band so that it is precisely punched from the background – for example, piano against orchestra playing visually and tangibly vividly and colourfully. Firmly and clearly. In turn, the treble is not only detail but also juicy, almost alive. Temperamental and rich, but ordered – suggestive, but do not attack sharpness.

I do not know if the interconnect from Perkune Audiophile Cables with the length of 2 meters is just better than three or five feet ( because I had no other lengths for comparison), but it is in terms of sound is the most favourable. It’s a pure and transparent sound without colouration and tinges – clear and resonant, thereby pointing straight toward the high-end. I recommend listening to these Perkune interconnects because for many audiophiles this may be at the end of the search for the optimal sound and I will write – perfect!

If you have enjoyed reading ‘Interconnect review Ludwig Hegel’, please share with friends  – thank you.