Bass is always a problem in the audiophile world, and it is tough to get the correct amount of Bass and the way that you want it to sound. There is either too little Bass of either too much Bass. And it really can be a massive problem for the Audiophile to get it just right. I am writing because I had an email from a contact of mine in the Tannoy group. And,  was asking some questions. And, so thought it could be useful information for other Tannoy followers. Bass improved in Tannoy Ed’s

I am a colossal Tannoy Fan and have been for most of my life while being involved in the beautiful world of Audio. I have owned so many different models of Tannoy from the Berkeley, Arden, SRMx15, Turnberry’s, Glenair’s, Edinburgh’s, GRF’s, Kensington. I have also listened to many other Tannoy loudspeakers, and everyone is different and has its personality. 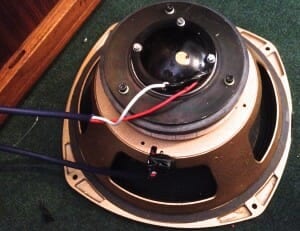 The Tannoy “pepperpot” 3149 12″ driver, fitted to the Edinburgh enclosures. The driver came with a Tannoy crossover. The crossover was first order HF and first-order LF and set to crossover at 1200 Hz. The driver had a frequency response of 28 Hz to 25Khz and a sensitivity of 94db.

The Tannoy crossover that came with the Edinburgh’s was I think not up to par, and it would not give these enclosures the response that I wanted, and so I went searching for a substitution. Bass improved in Tannoy Ed’s 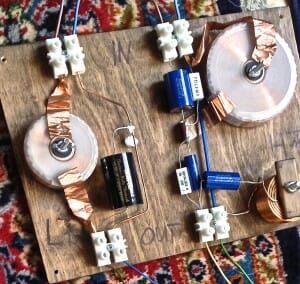 My first attempt was a crossover that was homemade, and I found it on eBay from an enthusiast in Rumania. The crosser was hand-built using high-quality components. And it crossed over at about 1K. But, I did not do what I wanted. However, it was an improvement from the Tannoy crossover supplied. And, so, my search continued. 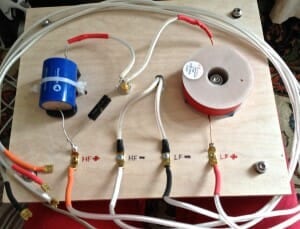 A straightforward crossover and designed by a Tannoy expert using all the best components available. It was Clarity Caps and Mundorf Inductors that crossed over at 1.2Khz. This crossover intended to work with the Tannoy 3811 which was a 15″ driver.

But, I thought I would try it on the Edinburgh’s, The quality of the sound was in a different league. Clean, clear sound, and far better than the Tannoy crossover that came with Edinburgh’s. But, still, the bass was lacking. Not by much but I wanted more!

I was determined to get the bass to sound the way that I wanted it too. And, my search came to a very well know and respected Audiophile. Who operates, as “Mainly Tannoy” and supplies professional Tannoy crossovers and components. 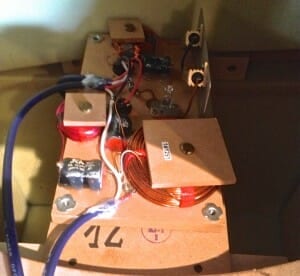 This crossover was from the Tannoy professional series and sounded very good. But, did not have the intense clarity of the number two crossover. I decided to get the soldering iron warmed up and made a couple of mods to the crossover. After, which, installed it, into the enclosures.

I also used a very high-grade cable to connect the drivers to the crossover. And, actually soldered all wires directly to the Drivers. The wires were soldered directly and the other ends fastened to the crossovers. And, now the only thing to do was to test the system. Firstly, to see if it all worked and secondly to see how it sounded!

The modifications carried out at one of my friends listening rooms. My friend has a pair of Tannoy Autographs, fitted with 15″ monitor Golds. And, these are a merely unique sounding pair of Loudspeakers. 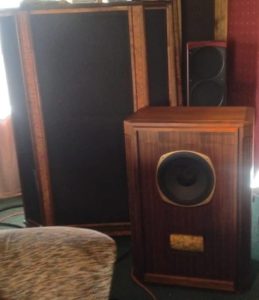 As you can see, Edinburgh’s look rather humble next to the Autographs. But, it was the sound that we wanted to hear.

There is a saying “Third time lucky”, and this certainly was the case. We had everything set up and been listening to our favourite test track. Now, it was time for us to hear what the Edinburgh’s sounded like with the new modified crossovers. Bass improved in Tannoy Ed’s

It only took a few bars of the music, and we were both in 100% agreement. Edinburgh’s sounded fantastic. They had the clarity in the upper regions plus the middle tines that these pepperpot drivers are renowned.

But, there was the Bass. OMG, what an incredible sounding bass. It had everything you could imagine. And, the sound was so close to the Autographs it was a shock for us. The best sound I had ever heard from Edinburgh’s. And, were resulting in such a pleasure from what we had done.

If ever, anybody ever says to me Edinburg’s are no good because they lack bass. I will stand up and tell them my story. There is, however, another small point to add to this story. My friend was using costly loudspeaker cables made by an American company. And, paid over 6000 USD for his loudspeaker cables. But, when we fitted my loudspeaker cables, the difference was let me say more than noticeable!

If you have enjoyed ‘Bass improved in Tannoy Ed’s’, please share with friends – thank you.