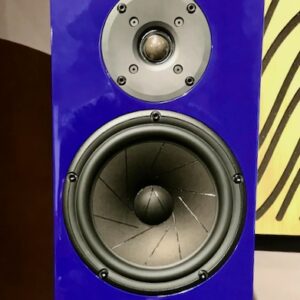 Today I am testing the very latest from Pylon audio, the Jasper 25 MKII loudspeaker, and with it the very latest ACE All-in-One Music Player. And what a great combination it turned out to be! Pylon Audio, established in may 2011, are located in Poland and created out of passion and love for music. Continuous contact with sound sharpened the sense of hearing to the extent they decided to deal with the electro-acoustic industry professionally. Based on unfailing motivation and many years of professional experience, Pylon has been designing speakers, speaker sets and related products.

Pylon Audio, established in may 2011, are located in Poland and created out of passion and love for music. Continuous contact with sound sharpened the sense of hearing to the extent they decided to deal with the electro-acoustic industry professionally. Based on unfailing motivation and many years of professional experience, Pylon audio has been designing speakers, speaker sets and related products. And considered to be amongst leaders in their field of audio perfection from a loudspeaker. 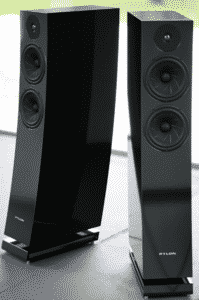 The Jasper 25 MkII – tightly combines the technical mastery of the band ranges reproduced by excellent Danish Scan-Speak drivers and characterised by coherence, ensuring effective and, most importantly, friendly transmission during long listening sessions.
The midrange and bass of the band are reproduced by a pair of 18cm mid-woofers from the Revelator series, giving the sound the correct scale, high culture and plasticity.
The tweeter has one of the lightest domes in its category – its vibrating system weighing only 0.18g reproduces minor nuances of musical structures with the necessary claw quickly if the realisation allows it.

In the Jasper 25 MK II speaker set, Pylon has moved away from rectangular forms. And bent surfaces reduce the formation of standing waves inside the enclosure. Instead, the chamber’s profiled front wall (designed to increase the structure’s aesthetic experience) and visual lightness align the acoustic centres in the most sensitive mid-high section. They are helping to achieve consistency, so crucial for realism known from listening to live music and facilitates the location of instruments on stage.
The Jasper 25 MkII is the essence of musicality, space and depth, with an unprecedented reproduction of micro and macro details of the recording, in an elegant and modern form. And the columns are to fit rooms of sizes from 20 to 50 m2.

After the loudspeakers were ceremoniously unpacked and transported on a trolley to the listening room (the loudspeakers are so heavy that none of us dared to carry them), we began to think about what to connect them. The core of the loudspeakers is two18 cm Scan-Speak drivers from the “Revelator” series. It is an advanced design characterised by detailed and fast sound and rugged and robust bass. The bass is fast, and the 20-meter AudioTrend listening room is complete with sound. And I think that the loudspeakers would handle a much larger sized room. I assumed that the bass would be good from the beginning as I know these SS transducers and what they can do.

In the lower registers, they are outstanding. Unfortunately, they usually do not perform so well in the mid-tones. But I was stunned when the vocals appeared with no sharpness or dryness like from other speaker applications. On the contrary, the vocals, warm and saturated, you can feel the depth of the sound – such a presentation encourages you to listen to it for a long time. The external structure leaves nothing to be desired with an exciting shape, nice matt varnish, small decorative elements in the plinths and solid screw-in feet, giving a field to show off if we ever want to screw in some spikes.

Summing up my first meeting with Jasper 25, even though it was short, was a very positive one. The loudspeaker has everything required from this equipment class, including solid craft, high-class components and an excellent design. I think it can do a lot to conquer the market. Review in Polish

Lukas and I decided to start the test with a nice cup of coffee and let the system play to warm up the components. After the first sip, I told Lukas, my god, the sound is so spacious. And this was a term I had not used in years! So, we finished our coffee and decided to play a selection of our favourite tracks. And to get a feel for how the system sounded. I think only a few minutes had passed, and we were both concluding just how warm the Pylon 25 loudspeakers sounded. And as well as the warmth from the speakers, there was also a fuller lower middle section appearing. 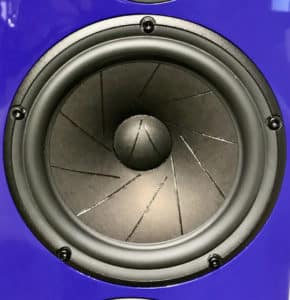 Now the system had warmed up, and we were on our second coffee and time to get the party started! And so we chose one of the most respected artists out there, Diana Krall. Diana sounded beautiful with all the warmth and power she could reveal. But this was the first time we both agreed that Diana Krall had never communicated as well as she did today!

Next on the list was our favourite artists from Holland. And yes, it is the legendary duo known as ‘Yello’ who always gives us great pleasure when listening. The quality of their recordings is second to none and perfect for testing all components and audio cables. Now, I do not know if it was the colour of the enclosures or the dose of coffee, but ‘Yello’ had also never sounded as good as they did today.

The third test for the speakers was music from Yosi Horikawa made in 2012 entitled Bubbles. And indeed a track to sort the men from the boys in terms of dynamics. The sound was so lifelike it made me jump a few times as it started. And Lukas said for him; this was the best he had ever heard his system sound. 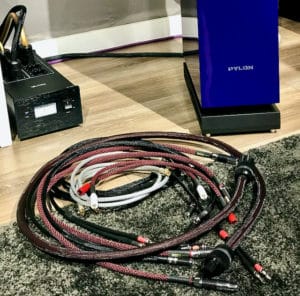 The cabling used in the audio system supplied by Chord, Taga, Van-den-Hul and Ricable. And these are all excellent high-quality cables, but we know (from previous sessions) we could improve the sound by changing cables. Jasper 25 MKII loudspeaker

And the first thing was to change the power cable. The cable we used was the Matrix Reference PRO from Perkune and two meters in length. The music played, and I felt like I had moved from the fourth row to the first row. Because the sound stage improved, and the music was all around me with such clarity, making me quiver! The speakers had come to life and were now a part of the room. And not just two speakers but part of the room. We changed the music back to Yellow and listened to ‘The vanishing of Peter strong’, But the sound improved so much, we just sat like statutes and listened to this track in total amazement. And I have never heard such a dramatic improvement from just changing a power cable. 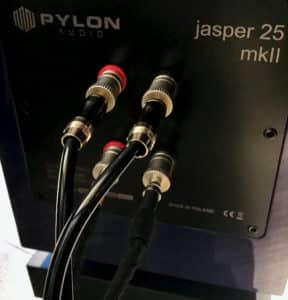 Usually, Lukas runs his system using a single speaker cable. But we decided to use the speakers in the Bi-wire mode. So we removed the speakers bridging plates and connected another speaker cable. The cable was the Matrix Reference PRO from Perkune and three meters long. Lukas was impressed and said he loved how the speaker cable looked and how easy it was to move around. And hoped it would sound as good as it looked! Jasper 25 MKII loudspeaker

We played the same track, but this time it was like ‘Peter had entered another universe’. The experience was electrifying because now we were on the stage, right there, and the music was all around us. Everywhere you could imagine, it was like we were in the other universe. It was almost like wearing headphones, and I had never heard such a fantastic depth and width to the music playing in my life. It was like the music had become a part of us. And now we were both in a feeling of shock. And now it was time for a coffee, unwind, recover and decide what to do next! 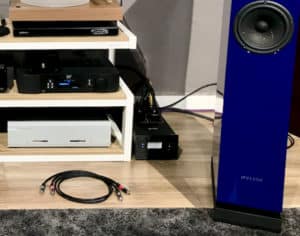 After we finished coffee, we decided to replace the Chord interconnect one meter cable with the new Matrix Reference PRO interconnect cable. And again Lukas commented on the look and feel of the cable and was impressed just how easy it was to use.

I wonder if things can sound any better, he said as he plugged the last cable in. I also asked what the changes would be because the Jasper 25 MKII were just a great sounding loudspeaker, and how could the sound get better? Jasper 25 MKII loudspeaker

We finished with Peter Strong and decided to start with Peter again. And to see if maybe the other universe would become more of a reality. The music played, and yet again, we could hear more detail and presence in the music. It was like Peter was right there before us and so realistic we could feel his breath and the way his mouth opened between words. We went back to Diana, and again it was like she was right there. And we could almost feel her breath as she opened and closed her mouth between words. Also, the sensations we felt were again new to us, and what a fantastic experience.

Because we were so impressed with this new sound, we wanted to do a speaker change. And find out if these cables made the same difference on a pair of cheaper loudspeakers. And so, we chose the Pylon Pearl monitors because they offer a sound associated with much larger loudspeakers. The sound is complete and, at the same time, transparent, correctly reflecting the atmosphere of the recordings. And dedicated to small rooms as a full-range stereo system or to work in the home cinema as added speakers.

The Pearl Monitor is a two-way design based on carefully selected transducers. The tweeter has a textile dome. The woofer features a rigid fibre-glass diaphragm with additional ventilation under the lower suspension, reducing the phenomenon of compression at higher volume levels. These monitors are not afraid of heavy music but can also recreate the calm atmosphere of refined productions in an appropriately sophisticated way. Also, the monitors will find themselves optimally dedicated to rooms between 13 – 22 m2.

The Jasper 25 MKII loudspeaker price is 5500 Euros a pair, and the cost of the Pearl monitors is 650 Euros a pair. So what will be the result, with such a price difference?

Pylon makes excellent components, and we loved the sound from the Jasper 25 MKII loudspeakers. And I will say on behalf of the team listening today; they are the BEST sounding loudspeakers I have heard to date.

If you have enjoyed reading ‘Jasper 25 MKII loudspeaker’, please share, thank you.