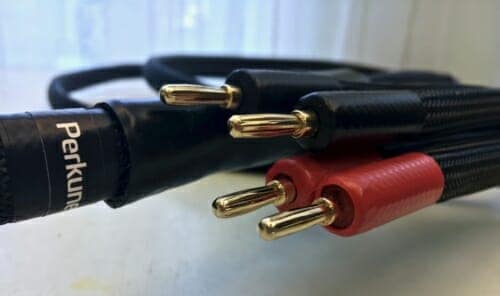 The first thing to ask is why bi-wired? Because there is much discussion about this topic. And, seems half the people reading will say they believe in bi-wiring. But, the other half will say “it is all a load of rubbish”. And, as a result, may be worth reading this bi-wiring article.

At this point, I will be quite honest with you, as I never really paid attention to bi-wired cables. I thought what was the point as everything is the same. So how could move the metal plates and replace with a cable make any difference to the sound heard?

To answer this question I decided to remove the metal bridging plates and replace with a cable. The cable used was from my collection and offered zero capacitance and resistance over a one-meter length. And was cut to twenty-five centimetre and terminated with banana and spade connections.

A spade connection was fitted to the lower terminal and the banana connection fitted to the upper terminal. I moved the loudspeakers to exactly the same position as they were prior to making the changes. And then it was time for the moment of truth, would I hear any difference?  Best bi-wired speaker cable

I put on my test track and listened to the sound and was pleasantly surprised because I could really hear a difference and decided to go for lunch to let the cables bed in. Upon my return, I was again surprised as the differences became more apparent. And because of the positive result decided to go to the next step and construct a bi-wired cable.

The cable used was again from my collection and cut to three and a half meters. The tails for the amplifier were left at twenty centimetres and the speaker tails thirty centimetres. Cable split was made using 24k direct gold-plated twin screwed collars and terminated without the need for soldering.

Banana connections used were 24K direct gold-plated twin screwed connections. This makes our cable solder-free and a very important step in cable construction and sets us apart from the others!

It took two days to make the cable too and I really enjoyed the construction process. I connected everything together and then inserted my test CD and pressed play. I then left the system playing to bed it in for an hour whilst I cleaned up in the workshop and made ready for the listening tests and cable comparison

Before I share my results, I want you to understand that I did not believe bi-wiring made any difference. I have always believed a good quality cable was the way to go. In numerous dealer demonstrations I have attended over the past few years all cables have been standard configuration. And the speakers have been used with the metal links in place.

I am the sort of person who is very open-minded and always ready to try something new and I love the expression “Don’t knock it till you’ve tried it” as this is true with everything in this life today. It makes me very sad when a person expresses their opinion on a topic without even trying for him or herself.

I think this is why there is so much confusion in the market place today. Another point is that a person could be using a great cable and tries a lower quality bi-wired cable. There will be a decrease in performance and this is often overlooked and so the bi-wired cable is not so good.

I want you to know that all cables used were the same quality and terminated in the same way. The position of the equipment in the listening room was kept in exactly the same position. I was able to use my wife’s ears as confirmation on my results.

My first test was to hear if there were any differences between the metal bridging plates and an audio cable. The answer is yes. The difference was better bass and a feeling of solidarity. Mids and upper edges in the music were more defined and there seemed to be more energy in the presentation. That was what I heard and that was what my wife heard and those results prompted me to continue. Best bi-wired speaker cable

My second test was to hear if there were any differences between the jumper cable and the bi-wired cable. Again the answer is yes. This time there appeared middle detail that I had never heard before.

There seemed better transparency but the most interesting observation was a feeling of freshness. If you could imagine looking at the Milky Way on a crystal clear evening and feeling every detail in the air then that was how it appeared. There was more sense of 3D and I could hear detail all the way around and even behind.

This cable was sent to a customer in the USA after he read ‘Best bi-wired speaker cable’ blog. And, this is what he said after he received the cables ~

“Hello Paul – The new 4-meter bi-wire showed up last night – had a brief chance to listen. And, the Initial impression is good – highs are much smoother than with the Tributaries. Also, Midrange is more natural. I haven’t listened to anything with enough deep bass to tell yet, but, the overall sound is steadily improving.

The most noticeable is that everything is more unified. Instead of highs, mids and lows separate from each other (as with the old cables) the music is now together, and balanced. The soundstage is less wide but much deeper.”  Thanks, Nick

I will say for me and my system, I heard an improvement in both cases. The improvement was far more than I expected. And, I have added these cables to the range. If you are looking for a bi-wired cable, jumper cable or bi-wired adapter cable, you are at the right place. Because you never know, you might just like the sound, from a Perkune cable!

If you enjoyed ‘Best bi-wired speaker cable’, please share with friends – thank you.