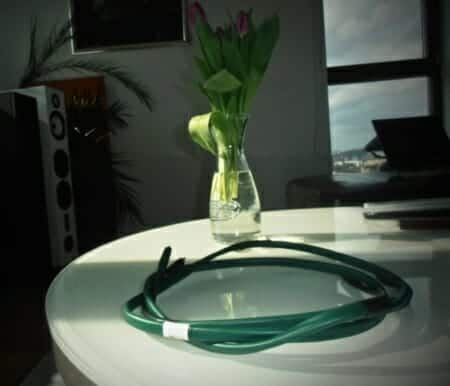 Audiophile cable interconnects review. For the third time, I have been describing the audio cables of the Lithuanian manufacture Perkune Audiophile Cables, run by Mr Paul Goodwin. First, the interconnects, a line of “Pro” series. And second, the speaker cables with a length of three-meters. It is not a coincidence that I am informing about the size of the loudspeaker cables, that these are just three-meters.

For such a distance (or possibly 4 meters), Mr Paul Goodwin considers optimal for speaker cables. And, in turn, interconnects, according to Paul, should be no less than two meters.He empirically tests it during numerous auditions, comparisons, etc. The well-known Nordost cable company also recommends such lengths. Therefore, nothing else but to accept these assumptions as correct and beneficial for the sound of the hi-fi system.

General impressions and construction I have already written that the RCA Perkune Audiophile Cables is two meters. Both cables, wrapped in a standard dark green PVC shirt, only the ends (about 10 cm) of the interconnect split. And they were covered with a black or green T-shirt, just like the gripping parts of the plugs. The plugs come from a reputable manufacturer – from Neutrik from Lichtenstein.

In the centre (i.e., in the middle) of the interconnect, a sticker with the inscription “Perkune” placed. And the directionality of the conductor has been marked. The cables are made robust and aesthetically. It seems that they will be able to conduct electricity for life. There is nothing more to describe because the constructor does not reveal the anatomy of the cable for the Audiophile cable standard series interconnect.

I used the Audiophile cable standard series interconnect mainly as a combination of the Musical Fidelity MX-DAC converter. With test amplifiers (Audia Flight FL Three S, Audio Analogue Puccini Anniversary, Pathos Classic MKIII, and Hegel H160).  Also as a combination of Trilogy 906 and Musical Fidelity MX-VYNL preamplifiers. With the same amplifiers. A full list of accompanying equipment is available at the end of this text.

Perkune cables offer a highly transparent and neutral sound. I am having a fluid and light consistency clad in rhythm and full tonal control. The entire message is stable, uniform, and coherent.  It is laminar, that is, it flows in parallel layers, without interference.

It’s a clean and clear sound saturated with details, complemented by Reverbs. It is worth noting the Lithuanian interconnect opens the sound. Allowing it to sound full breast, breathe freely, without disturbances, and with full potential. It is a catalyst for natural sound and, at the same time, emotional. Operating with the senses, managing feelings. The next substantial point of Perkune expressed mid-tones. The diameter is dense but communicative, direct, and natural.

The sound of the instruments, thanks to this, precisely punched out of the background. Piano playing in the origin of the orchestra plays vividly, tangibly, and colourfully. In turn, the full range is not only retail but also juicy, even vivid. Temperamental and rich, but arranged, suggestive, but not attacking with sharpness.

I am pleased to share this Audiophile cable standard series interconnect review but do not know if just a 2-meter Perkune interconnects better than one-meter. I did not have other lengths for comparison. But what I propose in terms of sound is at least favourable.

The sound is clear and transparent, without colouration and colouring. It is bright and resonant and heading towards the high-end. I recommend that you listen to the Perkune cable. Because for many audiophiles, it may be the end of the search for the best sound!

If you have enjoyed ‘Audiophile cable interconnects review, please share – thank you.