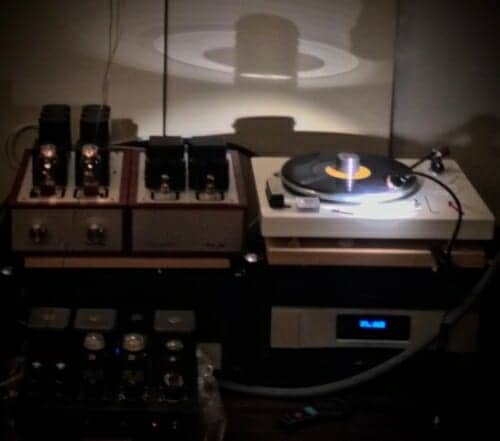 To hear the Vinyl sounds’ coming to you from the other room makes your heart race. The smell from a Vinyl, as you remove it from its sleeve makes you sigh because Vinyl sounds beautiful.

The feel of the vinyl, as you place it on the turntable is something that not easily forgotten. One of my friends just returned from America and invited me to his house to listen to his system. Now, with the addition of a new tube amplifier. He wanted me to hear how his Vinyl sounds – or so I thought!

It was a cold evening in the middle of December as we drove out through the forest to his house. I wondered if we would see the snow because it certainly was the time for snow.  As we went, we laughed about the lack of a white Christmas this year!

I would like to say at this point I have visited my friend on many occasions in the past. I always helped and advised him on various pieces of equipment is interested. It is still a pleasure to visit. But in the past, each time I have seen, he had moved the loudspeakers. And I always ended up repositioning and was wondering just what to expect this time!

The amplifier was a tube amplifier and made by a very well know audiophile. My friend also had a new Vinyl player hooked up. Because Vinyl sounds beautiful, I was looking forward to hearing the setup. I had not the slightest idea what I would see and what exactly was in store for me. When I walked into the room, I was actually in a small state of shock – yes!

The first thing that I noticed was the speakers were way out of position. But I was not paying that much attention. And, I was looking at the array of equipment that filled the room. I thought that I was going to see a tube amplifier and yes there it was right in the middle of the setup.

I was excited when I first saw everything. And, thought to myself, this should sound amazing. We spent time looking over everything to see connections and which cable went where.

I knew how it sounded before and where everything went. But, now wanted to be sure where everything was going. And I knew I was going to work, to make this sound as it should. So I thought the best thing is to ask for a nice cup of tea! 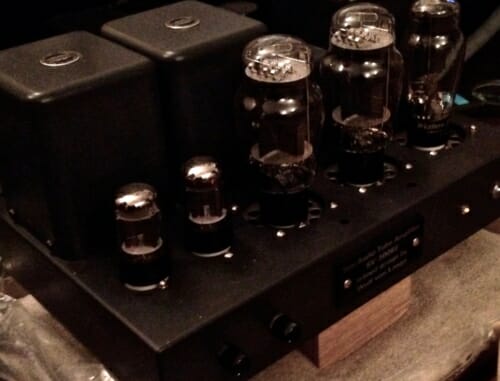 I finished my tea and decided to look at the amplifier, Which, was built like a tank. And, fitted with 300B tubes.  The 300bs have a smooth, silky sound which they are famous. To be honest, my favourite is 211 because the music seems more involving!

The amplifier was single-ended and designed to provide about 7 watts of power. I must add this was more than enough to drive the Tannoy 3811 drivers. The drivers were sitting in GRF memory cabinets. And, had a sensitivity of 96 dB.  Vinyl sounds beautiful.

A standard television gives out just a couple of watts but can sound very loud. If we now have an amplifier that is driving a pair of loudspeakers with a sensitivity of 96db then, believe me, you are unable to turn the amp up more than halfway.

Tannoy of England manufactured the loudspeakers. And, Cabinets or (enclosures) were designed by a gentleman by the name of Guy Fountain, who is a legend. More information on Guy Fountain

The Cabinets fitted at a much later date with a pair of NOS Tannoy 3810 drivers with unique hand made crossovers and cables. Which had received cryogenic treatment? The sound from these drivers, when fitted was a considerable step up from the original sounding design. Vinyl sounds beautiful.

I knew the loudspeakers needed to be adjusted, but first I wanted to hear what the system sounded like as it was. We started by listening to one of our favourite test CDs. We waited for the system to warm up (which can be a good thirty minutes). I was thinking to myself; I am not impressed.

Now it was time to hear the sound from the vinyl.  The turntable switched on, and a record chosen. The record was the same as the CD playing so we could compare. But before we started had to change another interconnect.

The sound from the CD player was good. But as I said earlier, I knew I had to adjust the loudspeakers to make it better. The turntable put into operation, and we listen to the CD and then switched over to the LP. I was impressed. The LP sounded very good, in fact, way better than the CD, which surprised me as the loudspeakers were so far out of position.

Now it was time for me to perform my magic, which is what I love to do. The first thing was to move the loudspeakers back to the wall and place one at the spot I had chosen. I then paced out the magic number of steps and positioned the second speaker. The distance was measured to the rear wall to make sure it matched. Vinyl sounds beautiful.

I sat in the listening position, and the music played. Not quite enough depth so another couple of adjustments. The music started, and instantly we both said what a beautiful sound. Then I made some excellent adjustments, and it all fell into place. Now the sound was fantastic! Best Audiophile Cables Online

We tried the turntable again with the same music. I looked at my friend and said: “well the vinyl sounds beautiful and is the best”. And he agreed with me 100%!

I will honestly say this is one of the best sounding systems I have ever heard!

Unfortunately, we had to leave, but the good thing is there will always be another day. The amplifier and its counterparts have to bed when I invited again I know how much better it will sound – providing of course that the speakers have not moved!

If you have enjoyed ‘Vinyl sounds beautiful’, please share with friends – thank you.