Tannoy, which is better? One of the most respected and sought after loudspeakers in the world made by Tannoy. And, in my opinion, produce the best sounding loudspeakers for all musical needs.

Tannoy has a tremendous following due to their remarkable history. And, my taste of Tannoy was many years ago whilst visiting a friend in the United Kingdom. I was taken into my friend’s music room to see his latest acquisition. Which were A pair of Tannoy Berkeley’s, and made in 1970. And, were in lovely condition, looking beautiful. I thought the speakers were a bit small size for the room. But, my friend was an audiophile, and if he was showing me his system, it must sound good. I was very interested to hear the sound. Because, in all my years, I had never listened to a pair of Tannoy loudspeakers.

My friend inserted a CD, which was one of the classics from Dire straights and pressed play. The sound coming from those 1970 Tannoy cabinets shocked me in such a way I will never forget the experience. I have never heard such a rich, full bass. The sound had so much detail and was alive and was a real joy to listen.

When I returned to Lithuania, I decided to find a pair of Tannoy loudspeakers because I wanted to have the same sound. I searched everywhere but could not find anything in Lithuania. I decided to ask some of my friends if they could help me. And, As luck would have it, a friend of a friend was getting married and wanted to sell his Tannoy Edinburgh’s to raise money for his wedding.

The Tannoy Edinburgh has a 12″ driver, so one would not expect the same bass response the Tannoy Berkeley’s had. But, because the cabinets were more significant, the sound must be good. The Loudspeakers arrived in the Tannoy shipping boxes and were in fantastic condition. My Edinburgh made in 1997, with a cabinet volume of 200 litres. And, fitted perfectly into my listening room.

Nordost made the cables in my system. And, were ‘Valhalla’, because I liked the sound these cables gave. Rich, full of detail with a great soundstage.

I inserted the CD and pressed play and went back to my listening position. And, sat down, ready to hear what these beautiful Tannoy loudspeakers would sound.

The sound was full and lifelike with excellent detail and sound-stage. But, was lacking at the bottom end—my first listening session with Tannoy loudspeakers in my apartment in Lithuania. And, now I wanted to improve the sound. I decided to look for something a bit different. 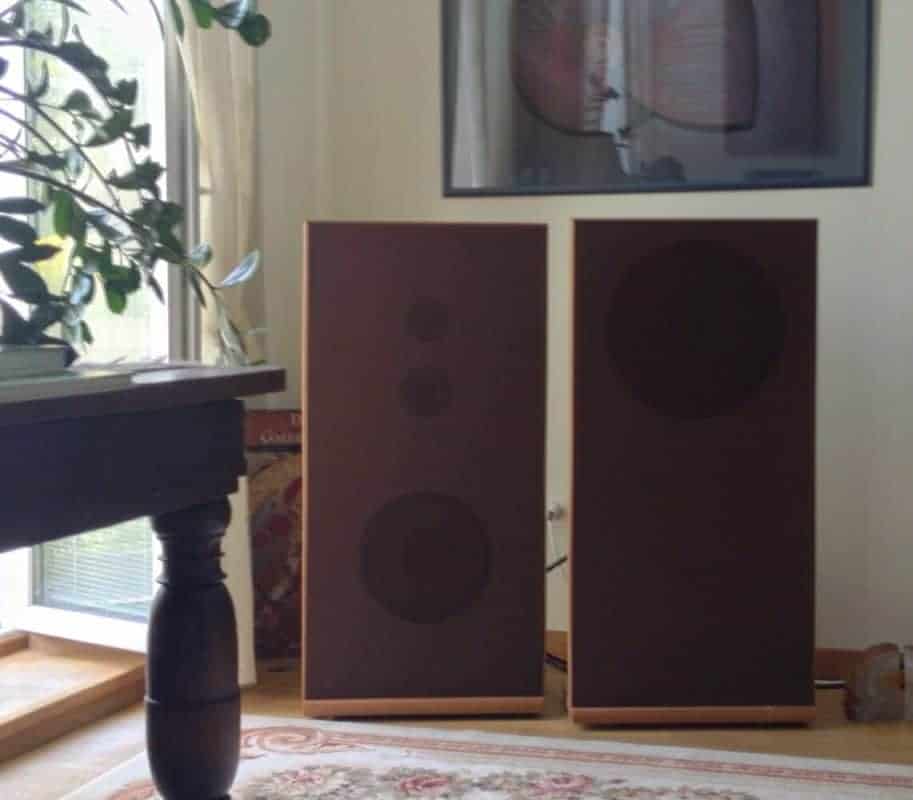 Open Baffle is becoming popular in recent years. And, is always a good topic for discussion between audiophiles. Some, seem to love the idea and others hate it. Some of the open baffle systems are works of art and seem very futuristic. And, so, decided to build an Open Baffle system for myself.  Just to see how good it could sound.

I started this experiment by taking an adorable old pair of Wharfedale Dovedale 3 speakers that I had for years. And, sounded very good in the enclosures they were. The Wharfedale’s are a very nice sounding speaker. And, have a vast range. They were very well suited for this purpose. And, I was eager to see what the OB fuss was.

The first step was to build my OB. And, for this, I used a sheet of 25 MM MFD. Which, I obtained from the local hardware store. They were able to cut the driver holes and the sizes I had specified. Getting the materials were accessible, and I returned home to carry on with the build.

Next, I had to assemble the pieces, and this was done just by simply screwing the four sections together. And, was interested to hear what it would sound like with drivers in place. As, this was a temporary measure, and if I liked what I heard, I would continue with glue.

My next step was to fix the bass driver, the midrange driver and the tweeter securely to the baffle. Which, was done simply by screwing the three components directly on to the Baffle. Afterwards, I was able to fit the crossovers and the termination box. Which, was by screwing to the base of the Baffle with the correct size screws. Next, came the wiring and was able to use the same wiring as was in the original cabinets. But, had to be very careful not to cross any of the wires, because phase was critical!

The next step was to do cover the front of the OB with a material, which was transparent so the sound would be able to pass through. The material also had to have a nice colour so it would fit into the room and not look out of place. And, done with material taken from the local curtain shop. And you would be surprised, just how many shades of brown there are!!!

I was able to fit the material to the Baffle with the help of an industrial staple gun. And, it went on very smoothly. I was able to start at the top and work my way down. And, pull it tight to give the material an easy path for the sound. The next step was to add some wooden surrounds because these gave a lovely look with a professional touch.

The first thing, I noticed was the air and space the music now presented. Gone was that boxy sound, and there was a very open and inviting sound. The bass was full, all the highs were in place, and there was a much more lively feel to everything. I was impressed and excited to hear this transformation. The music also had a somewhat 3D effect to it. And, this I had not noticed before, with, the drivers in the original cabinets. So this was a real improvement in the sound, and I liked what I heard!

Will I ever go back? Good question. But, in all honesty, I was so impressed, I have decided to take it a step farther. I will find a pair of 15″ Tannoy drivers and build another set of Open Baffles. I will perform the same tests, using the same drivers in the OB configuration. And, will put them into a 300 Liter enclosure. All good fun!

If you have enjoyed ‘Tannoy, which is best?’ please share with friends – thank you.