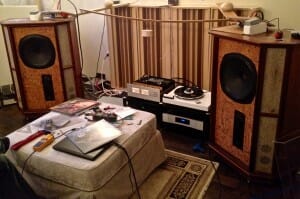 Tannoy loudspeakers are the best

I began my Tannoy journey about fifteen years ago. I was using loudspeakers made by a French company called JMLab, and the model, Focal Diva. And I did not think anything could sound better. I had been using JMLab Micro Utopia before, and it had taken me a couple of years to reach this audiophile level. Tannoy loudspeakers for me

I had been visiting an old friend in England, who took me to his music room. And showed his latest acquisition. A pair of Tannoy Berkeley’s. They had been built in 1970 but were in very excellent condition, and they also fitted into his room very well. I was interested to hear what they sounded like. Because, in all my years of being involved with music and audio, I had never listened to Tannoy loudspeakers.

My friend had a superior system made by a Japanese company called Esoteric, and the amplifier was the Esoteric A1-10. The Source machine was again from the same company, and was the Esoteric DV-60, and I thought this does look pretty good. And felt the speakers seemed a bit on the small size for the room. And wondered, how they would sound. My friend was an audiophile for many years and if he was showing me these, I figured they must sound good. But speakers build in 1970?

The CD was one of the classics from Dire straights, and my friend pressed play. And think the only word that comes into mind ( as I write this) was shock. Because that is what it did to me. The sound coming from those 1970 Tannoy cabinets shocked me in such a way I will never forget that experience. And i have never heard so much bass and fullness. I have the same CD back in Lithuania and often listen with my Focals, but now I realised that indeed something was missing from my sound.

When I returned to Lithuania, I decided that I had to find a pair of Tannoys, as I wanted, to have that Tannoy sound in my apartment. I searched everywhere but could not find anything in Lithuania, so I decided to ask some of my friends if they could help me. As luck would have it, a friend of a friend was getting married and so wanted to sell his Tannoy Edinburgh’s to raise money for his wedding. Tannoy Edinburgh’s have a 12″ driver so one would not expect the same response as from a 15″ driver the Tannoy Berkerleys had.

The Loudspeakers arrived in the Tannoy shipping boxes, and they were in really fantastic condition. They were made in 1997 and had a cabinet volume of 200 litres and fitted perfectly into my room. The JMLab Focals removed, and the Tannoy Edinburgh’s set up and then came the moment of truth, the listening test.

I set everything up to the best way I could and used the same CD from Dire straights. And would be able to hear the difference between JM Lab Focal and Tannoy loudspeakers. I was using the Esoteric I-03 amplifier, and the Esoteric X-03 SACD player with cabling was from Nordost. It was a perfect sounding system, and as I said earlier I had no reason to even think about changing until my trip over to the UK

I inserted the CD and pressed play and went back to my listening position and sat down. And ready to hear how these beautiful Tannoy loudspeakers would sound. I wanted to use a word that is not suitable for print. But, will just say I was in shock when I heard the lack of depth in the bass. And, sorry to say but the Focal Divas sounded very thin in comparison.

The Focal Divers did give a bit more transparency and edge to the music, but the Tannoys gave a more musical performance. And, this is what I wanted. So from my first listening session with Tannoys to the fact that I now had a pair, was a step in the right direction.

The time passed, and I have finished with the oil industry and started to work with Perkune audiophile cables. And have been working with and testing cables. But after hearing the 15″ Tannoy drivers I decided I needed to upgrade.

I went to the UK and visited another friend who has excellent contacts. And I was able to audition some great examples of 15″ Tannoy drivers. Returning with NOS Tannoy 3818. Which, are from the Glenair series, made for the North American market. These are very sought after. And the drivers regarded as one of the best drivers that Tannoy ever produced.

I will say at this point. Between the Edinburgh’s and these cabinets, there have been five other sets of Tannoys. And is because I simply love the Tannoy sound. Also decided that I needed to build the enclosures with a capacity of 300 Litres. And this would give me the correct feel and speed from the music.

I have heard so many systems in my life. And now am working with Perkune audiophile cables, I love what I do!

If you have enjoyed ‘Tannoy loudspeakers are the best’, please share with friends – thank you.