Tannoy 15″ Challenge – OB/300 litre. Tannoy makes some of the world’s best loudspeakers or “Drivers” as called. One of the most exciting drivers that Tannoy ever made was the Tannoy GRF Memory. And so I decided to have a Challenge using this driver.

The drivers had been mounted in the Open Baffle configuration, and were placed in my listening room. And set up using Perkune cables and system set up techniques. It took a lot of time to position the drivers because Open Baffle is not the same. And you have to allow for the correct placement to get the best bass response. 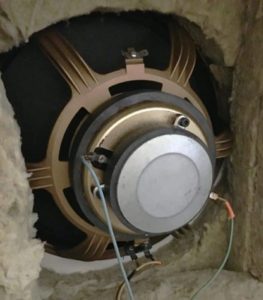 The drivers were in beautiful condition and came from a perfect home. And, had been housed in the original GFR memory cabinets that Tannoy produced at that time. The cabling was all actual on the drivers, and there were no cracks or rips in the paper. And everything was in excellent condition, and we were really in for a treat. I wish to add that the original Tannoy crossovers were not used. And a pair of custom made crossovers cryogenically treated utilised giving a much better response and flavour to the music.

The sound from the drivers in the open baffle was just excellent, and it was the same feeling with all types of music. All we wanted to do was just keep listening, and whatever the volume we felt no fatigue at all. The music had that 3D quality to it, and the overall experience was indeed very satisfying. The Open Baffle has a precise sound. And gave a whole new meaning to the music. Something heard, never forgotten! 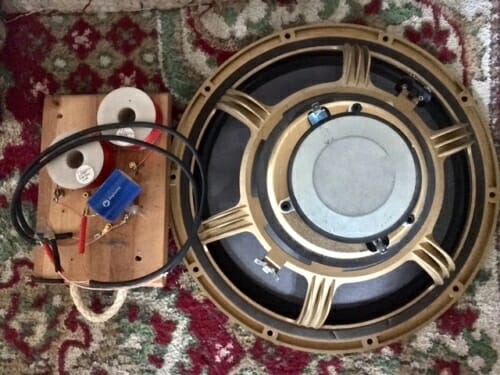 The next step was to remove the drivers from the mountings, and fit them into the 300-litre Enclosures. The drivers were mounted from the front to the front baffle and firmly screwed into place. Also, the Enclosure was lagged and had secondary lagging fitted using a unique material that is well suited for dampening. The enclosures were made from 25 mm MFD and braced to prevent any vibration. And the rear panel housing the crossover was also fitted with the sound absorbent material. But only one layer was required to give the necessary dampening.

The drivers were mounted in the enclosures, and all cabling attached. And then came the tricky part to put the Enclosures on Spikes. They weighed 65 kilos each it was a tough job to do. And I prayed that we had got the positioning correct as it was tough to move around. But where there is a will there is a way!

It only took a few small adjustments, but everything set up correctly. And now we could listen to our music. I always use a few test CDs which have been angled. Because it does give a much better sound to the music. And I would strongly suggest that everyone should try for themselves.

What can I say? Many things but the first things that grabbed me was the incredible bass heard which just seemed to go on forever. It went so deep deeper than anything I have ever heard in my life, and that is saying something.

At first, it seemed just too much, and so I played a different CD, but this time, it was perfect so very dependent on how the CD recorded. But one thing I found is that I have to turn the amplifier up just a little to get the same volume as we had when using the drivers in the OB configuration.

We have the same Tannoy 15″ drivers that have put into two different configurations which are an exciting test on the drivers and the Enclosures. Also, the results were very different. But, at the same time, very revealing and even compelling. They both showed tremendous strength and sped whatever the music. And, they also were very dynamic and filled with detail. Which, one did I prefer? Well, I think it is the most challenging question I have asked.  I love the sound of the GRF’s in both setups.

But, because I am a real bassman (used to play bass in a rock band many years ago), I would say the GRF’s in the 300-litre cabinets are (as a famous saying goes) the best thing since sliced bread! I hope you have enjoyed the above challenge because writing this for me has been one of the best experience in my life (as an Audiophile!)

If you enjoyed ‘Tannoy 15″ Challenge’, please share with friends and colleagues – thank you.