I had been driving Ferrari, Porsche, Aston Martin, E-type Jaguar, And, also had many other sports cars that were available. But, had never owned a Maserati. I was driving past one of my friend’s garages, and I saw the Maserati sitting in the showroom. And, so I pulled in to have a look. And, so I have written The Maserati was dead, blog so that, you will see the problems!

I was interested to see how good this Maserati felt in comparison to the Ferrari Dino 246GT  I was driving. I had an excellent relationship with Terry, who owned the garage. And, he said he would be more than happy to let me have a trade price because it was not his cup of tea. So I said ok, let me take it out for a spin, and I will tell you. The Maserati

It was a very satisfying feeling to sit behind the wheel of a different breed of exotica. And, I quite liked the feel. I had a good deal with Terry, and we drove the cars to my house. The Maserati was then taken to my mechanic to check it over. I ran Terry back to his garage, but upon returning, I decided I would take the Maserati for a drive. But, I did not realise the trouble that awaited me.

I drove the Maserati through the town and onto a road I know very well. And, it is an excellent road to check the handling of cars I used to own. I got the feel of the vehicle but did not realise how sensitive the air braking system was. They were just too good, too optimistic and seemed to give everything all at once, which was not how I was used to feeling a car during braking.

The result was, I ended up going around a curve on the road and touched the brakes. But, the brakes just locked the wheels. And, I ended up in a ditch, looking like something from a James bond movie. I was able to get one of my friends to help me remove the Maserati from the ditch. And, was taken his garage to do a cleanup and check the underneath.

I had not had the Maserati very long and had spun the car a second time. And, so I decided to get rid of it. Because the car’s air braking system was not good for me, I had another friend in London and decided to take the Maserati to show him. My friend had a Ferrari Dino; he would give me a good deal. And I asked my mechanic friend to come with me to London. And, to help, evaluate the Ferrari. The Maserati

The Ferrari looked very beautiful. But my friend said he was not happy because the car was damaged. And, the repairs were done but not as they should have been. We left London and headed back for the long drive home. I was very disappointed because I still had the blue devil!

It was slow going, as there was a lot of traffic on the road. And, to make it worse, there were road works carried out. The road works were not just in one place but seemed that the whole journey had been a series of road works. To make matters worse, it was now raining, which, really slowed things down. 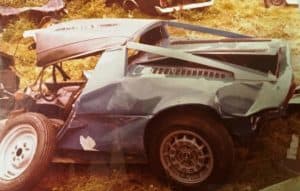 We were driving down the main road and came to a detour sign. And, so I took the detour. A new piece of roadway appeared, on which I had never been. And, as we came around the corner, there was a truck which had jackknifed across the road. I applied the brakes, but my wheels locked up, and I spun on the wet, muddy surface.

The Maserati spun over to the other side of the road. And, down a very steep hill. And, somersaulted three times, throwing my friend and me out of the car through the front window. We ended up in the bushes 100 meters from where the car had come to a standstill.

I think I had my guardian angel with me.  Because my angel said, ‘Not today, as you have many things to do in your life,”. As you can see by the pictures, the car was a total write off. How was it even possible for a person who could survive such a crash. A question that I often ask. The front of the car was gone entirely, and it was a miracle we both survived. 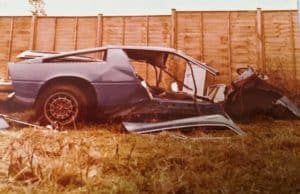 When you study the pictures, it was like that we had been taken out of the car by something. Or, someone. I know it sounds a bit weird. But we were thrown into the bushes to protect us any further. My question is – do I have a Guardian angel? Well, we all have, don’t we?

It was so strange for this to happen, and it makes you wonder why. We were not speeding, and it was just a series of events which, led to a significant change in my life. 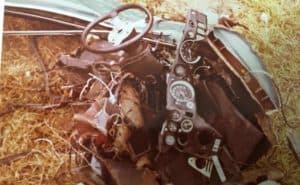 I was thrown through the front windscreen and catapulted into the bushes. A few people saw the accident happen. And, I was able to piece the events together, a few months later. After the accident, we went to the hospital. But, I was taken immediately to a hospital called Addenbrookes. A hospital was specialising in brain damage.

I was unconscious and had sustained injuries, and my true condition was unknown. Plus the fact, I was in a Coma. The Coma lasted six weeks, and nobody knew what would happen. In the past, I had a few scrapes and bruises, but nothing that would ever make a person think I had ever been in an accident. The Maserati

And so I lay in the hospital as the world slipped by. But, one day, I heard singing and slowly opened my eyes. I saw my wife’s best friend sitting by my bed, holding my hand. She looked at me and said, “Paul, you have come back to us”. But, I passed out again.

Two days later, I sat up in bed and said I needed a drink. Suddenly the room was filled with people. And, there was so much excitement. L felt like I was a movie star.

If you have enjoyed ‘Maserati was dead, but I was OK’,  please share with friends – thank you.