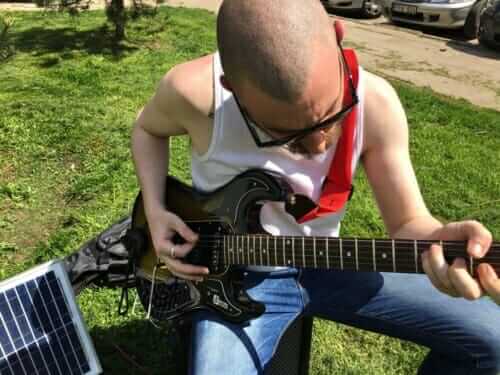 Guitarists hear a difference – Let me first go back to the ’70s where I was a guitar player and would drive my mother mad with all the noise I used to make in my bedroom (as many of us did in those days!)

It says that a guitarist certainly can hear the difference between cable he uses and the sound produced!

When I was at school, I made my Electric guitar in the woodwork class, and I was even able to paint it a beautiful bright red. And, was a clone of the Famous Fender Stratocaster as used by my idol Mr Hank B. Marvin. Whom, I had the pleasure of meeting in Great Yarmouth as the Shadows were performing live and had a friend who was working backstage, I was able to get inside and to make one of my dreams come true.

I was getting very good at playing, and every time the Shadows brought out a new record I would buy it and then sit for hours next to our record player and learn three notes at a time, so I was able to get the playing style and sound as close as possible to the style and sound of Hank.

My mother was very proud of how good I had become, and so one day she took me down to our local music store and bought me a real guitar. It was a Burns Jazz finished in a beautiful green burst and with that and my Vox AC30 amplifier and my Watkins copycat echo I could sound so close to the master it was uncanny!

I did eventually switch over to a Fender Stratocaster but then decided to change to bass. And, ended up with a Gibson Thunderbird – I wish I still had these guitars now because they were so much better than the modern-day versions, but that is the way things go these days!  During all these early days I was unaware of cables and power cords and had no idea there could be any differences in the sound from a standard power cord and an upgraded power cord, and that is why I decided to do a test on the cables. Guitarists

Me Forty-five years later and I am still playing but not quite as it seems because I only started playing again about two years ago. They say things happen for a reason, and at the time, you just never quite know why we do the things we do. It was the same for me I just had the urge to start playing the guitar again and so went to eBay looked under burns guitars, and there it was a  Burns marquee in a green burst.

Built-in 2003 so I paid the money and got my guitar and have never looked back as it seems to have brought me into what I am doing now which is my involvement with the Perkune range of Audiophile cables. Just for the record, I think that this guitar has many of the characters of the Burns Jazz that I had and is a magnificent built instrument,

I had last year also tried the latest models built in China. Which, were the Apache and the Dream noiseless, and even a Marvin. But, sorry to say they all went because they did not play as well as the marquee. Because the neck is the best, and very similar to the Fender Stratocaster.

Back to the power cord test and I want to stress that when you are doing tests and comparisons between cables, then it is essential that you first check to make sure the polarity of each cord is the same and they have had an hour to warm up.

I took the standard power cord that came with the amplifier and let it warm up and played a few bars and a few notes and listened to the sound with attention to clarity, string tone, bass response and treble quality.

I then removed the standard power cord and fitted the Pekune three-meter power cord and let it warm-up and then played the same chords and notes listened to the results that I got and changed back to the original power cord and repeated everything three times.

After this finished,  I turned up the volume, so it was about half of the amplifier and then repeated the whole process, so now I have even more information to compare. Still, It seems that there was no other difference with a low volume or a high volume.

It was effortless to hear the differences between the two power cords as it was an instant result. The Perkune power cord gave a much thicker, richer sound. There were a better cleaner and tighter bass. The highs extended and the tone of each string was now clearly defined. If I were to give marks to the test, then I would say there is about a 20% increase in overall performance and sound quality.

One of the companies that I hold in very high esteem is Nordost Cables. And, last year I was able to attend an exciting cable demonstration, which was because the Nordost Cables representatives had come to all the Baltic countries. But, at that time they did not have cables for Guitarists!

For some reason, when I was testing my power cord on the amplifier. I thought I would visit the Nordost Cables page. You see, it was my love for Nordost cables that started my adventure into building my cables. And, I wanted to know if they also had, thought about the guitar cables. And, now, they have a paged dedicated to Guitar cables!

If you enjoyed ‘Guitarists hear a difference’. Please share with other guitarists – thank you.