Four – was it Quadrophonic? The sound of the seventies – Can you remember many years ago when we had the stereo LP and then along came to the CD. Then along came the fantastic quadrophonic LP and what a revelation that was. Instead of two speakers, there were four speakers!

Back in the ’70s, I was into everything you could imagine, and I was always looking to get the best sound I could. And, from whatever system I had at the time. When the Quadrophonic sound introduced, I jumped at the chance to hear something a bit different.

I was one of the very first people living in Norfolk, England, at that time to own a Quadrophonic system. And, my friends would come round to listen and would always be amazed at what they heard.

I was able or ordered a JVC quadraphonic amplifier as they had just introduced. Also, had four Leek 600 sandwich speakers and a Technics turntable. Which, included a quadrophonic cartridge. I must add at this point; I knew nothing at all about power cords and cables. And, just had the standard cables supplied. But, the sound at that time was fantastic. And, can still remember how it sounded even after all these years!

One evening we had a great party with some of my friends who played guitar and drums. I was playing bass. The party ended up with 128 people in my front room. And, today, people still talk about Paul’s party at Acle!

There was one thing that got on my nerves, and that was the sound of the static. Static is a killer and gradually builds up. What I did to combat this was to build a “Drip” feed. Yes, just like in the hospital. I fitted a bottle over my system and fed a skinny tube onto the tonearm. And, a couple of drops of glue and filled it with distilled water.

When the record played, it became wet. Which, meant, the surface was wey but, the sound was perfect—absolutely nothing in the way of interference. And so I had done something outstanding and was pleased with my achievement. I know that static is a real killer, but today we have anti-static guns, sprays, mats, pads and all sorts of creative things to help us!

Where did it go? 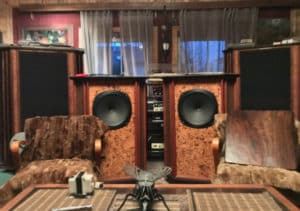 So, where did the quadrophonic system go and why? I think, at the time it was just not viable to produce the records. And so it gradually died but, what a pity it did.

And I think that in the future we will have something better. Because technology is constantly changing. And as we learn we grow!

If you enjoyed ‘Four – was it Quadrophonic?’,   please share with friends and colleuges – thank you.

And time has passed in the blink of an eye. But what a great learning experience it has been for me. But I will say that quadraphonic has certainly been replaced by Surround sound!