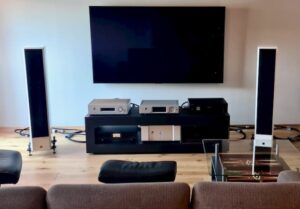 Fantastic audio cable – Four years ago, I was looking for audio cables. And I wanted to find an expert in the audiophile field. Also I was fed up trying different audio cables and wanted to improve my audio system sound. And I know a tall order, but started to read audiophile cable reviews in the forums. Because of my desire to improve my audio system was strong. After a few days of looking, I read about an Englishman located in Lithuania. And it appeared this person knew what he was doing when it came to sound. And, as a result, sent an email to the address given in the review and contacted Mr Paul Goodwin.

I found a review on a speaker cable written by a review expert in Poland was fascinating. And I saw he had tested other lines made by Paul. And I understood Paul offered a wide variety of cables which was what I wanted. Furthermore, the price of the power cable was perfect, and excellent value if the power cable performed as well as the review from Poland. The review was written by Mr Ludwig Hegel from Stereo i kolorowo in Poland. 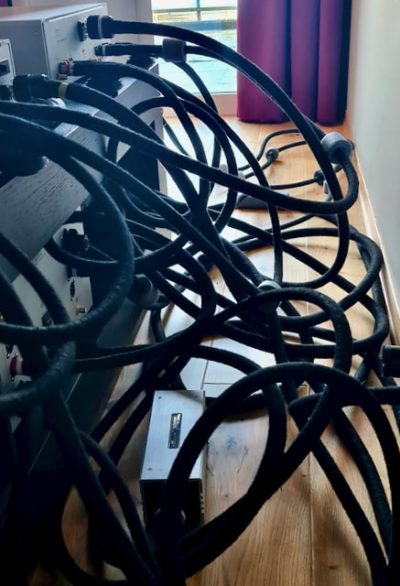 After a few emails, I decided to order a three-meter power cable. And the cable was to become the heart of my audio system. Also, Paul explained how the cable worked in great detail and gave examples from satisfied customers showing their results. And making me feel I was in safe hands.

And depending on the results, the power cable would undoubtedly become the base of my system. I was certainly expecting a fantastic audio cable, and it proved to be as expected upon arrival. And the power cable was more than I expected in terms of performance and dynamics. Also, I realised that I had found the person I wanted to work with to build up my audio system. And this is the result of my system fours years later.

The picture shown on at the top, is my audio system in Norway. And I am delighted with the performance of the system. Every person who listens is amazed at the quality and cannot understand why it sounds so good. And I have included a list of  the component I use and also the audio cables and Power cables. Fantastic audio cable

The Beethoven Concert Grand Reference is a no-compromise loudspeaker. And breaking grounds in setting new standards in state-of-the-art music reproduction. Also to say only the design goals for such a speaker were high efficiency. Having outstanding dynamic range, with excellent low bass extension. And ultra-wide bandwidth from a reasonably compact enclosure miss the more significant point.
Beethoven’s overriding goal, to produce music on a compelling scale to transform the listening room and transport the listener. And at the heart of the design stand Spidercone drivers. One 6 inch midrange and three 7 inch woofers. And all with the patented flat Spidercone within new construction. Fantastic audio cable

The plane surface of the spider cone offers the advantage of precise, piston-like movement. Any diaphragm should move in and out as one unit. And not as a quivering mass of uncorrelated vibrations. It should move as an excellent piston. The flat cone is exceptionally stiff, with bracings of a height of 18 mm (bass) and 14 mm (mid). Also light, respectively, further reinforced by glass fibre in the new X4P mixture.
The rear side bracings are constructed so the whole impulse energy is allocated evenly via the entire surface of the flat cone. Thus, every square centimetre delivers the same impulse as its neighbours. Resulting in revolutionary impulse response control.

As the cone/diaphragm construction builds upon a giant voice coil, the radiating surface in its middle is large. Thereby making it a significant sound determinant. The Five cm area is now an inverted dome made from woven fabric. Which, is double-coated on its rear side. And perfection, achieved by listening to various axial positions. And with extraordinary homogenous results by employing a recessing of 8mm. Fantastic audio cable

This 1.1-inch tweeter can reveal even the most delicate nuances. And are most naturally while imparting no stridency at all. Also extending well down into the midrange spectrum.
The crossover circuitry possesses the elegant simplicity of soft filters. Pure first order, 6 dB per octave slopes to Bessel second order. And the essential complexity resulting from listening needed to weave the drivers’ output. All decisions concerning individual components and the circuitry layout were made through extensive listening tests.

The DAC. And In today’s digitally connected world, you need more than just a DAC or a streamer. You need a device that can effortlessly render your highest resolution files and, without missing a beat. And plays your favourite music streaming services or BBC broadcast. Featuring the new ESS ES9038PRO DAC chip and a newly developed Morion quartz crystal-based oscillator. The QX-5 Twenty elevates digital performance to an astonishing level. Linking all of your digital media together with every conceivable digital input. The QX-5 Twenty streaming DAC provides unlimited flexibility and convenience at the highest level.

The Oppo UDP-205 Signature Edition takes the improvements on the Reference Edition and enhances them. To create a true, No Compromise 4k Media Player of truly world-class quality and performance. When a Blu-ray or SACD disc is played, the high speed can cause unwanted vibrations, reducing disc read accuracy. Audiocom replaces large sections of the mechanical 4k disc transport mechanism with custom made, precision CNC parts.

One of the most cost-effective upgrades you can buy for any high-quality audio system. Sigmas is a multi-award-winning six-way mains conditioner. And features two high-current outlets, utilising a lighter version of the Titan’s Direct-Coupled© circuit. And provides high current low impedance power for amplifiers subwoofers or active loudspeakers. The four remaining output sockets are medium-current for source components. Each outlet of Sigmas has its own dedicated power cleaning network; thus, six power cleaners are in one box! Sigmas represent an extremely cost-effective way to upgrade a complete high-end audio system fully.

The Perkune audiophile cable and power cables are completely neutral and offer minimal resistance. Allowing you to hear more of the music.

The Sort Kone is a directly coupled and mechanically tuned resonance control device. And using a sophisticated new approach to the problem of supporting sensitive electronics. Whereas most equipment, referred to as Isolation devices, completely misunderstands the nature of the problem. The most harmful mechanical energy doesn’t enter the equipment from outside; it’s generated internally by the audio circuits and their power supplies. As a result, transformers, power supply capacitors, even the active devices themselves all vibrate as they operate, And those vibrations occur right where the weak signal is, creating timing errors that smear and distort the music. The Sort Kone, designed specifically, to deal with this threat to audio fidelity.

Blue Horizon’s unique Spike Shoes MKII, made with a machined stainless steel outer casing designed to sit beneath spikes of floor standing speakers. Also speaker stands or other cones. They serve a dual purpose; their chaotic cork and rubber mix protects flooring and aids resonance control. In addition, they enhance sound quality by suppressing resonance that leads to sonically damaging microphony in audio components. It is the second of these functions that sets them apart from other spike shoes on the market.

The GAIA isolators are machined units that incorporate IsoAcoustics’ patented design to provide a high degree of speaker isolation. And while resisting lateral movement and oscillations to maintain alignment with the listening position. In addition, internal reflections from the hard supporting surface result in greater sound clarity. Also the soundstage blossoms to open a three-dimensional image of natural, spatial sounds.

Optimal results are heard by installing these units with the logo facing the listening position or rotating 180 degrees to align the isolators with the speaker’s motive forces. And lifting and placing the speakers into position as the GAIA lower isolator will adhere to the supporting surface. When a speaker is placed on a hard surface, secondary internal reflections result. Any artefacts of this smear that is similar in the two channels are perceived to be in the centre. Therefore causing the sound stage to collapse. The GAIA series of isolators eliminates this smear resulting in a larger 3-dimensional sound stage.

The use of spikes with Hi-fi components improves sound quality. It is also an inevitable fact the use of points damages the surface on which they stand. One has seen numerous attempts to make feet that prevent the disadvantage of damaged floors, but they all render reduced sound quality. The use of spikes gives the best sound! Soundcare® has seriously dealt with this problem and has developed a new SuperSpike that takes care of all good advantages and protects all surfaces. Several high-end producers deliver their products with Soundcare® SuperSpike from the factory. Listening tests in Norway, Denmark, Japan, Germany, England, France and the USA.

Why use Soundcare® SuperSpikes? When the weight of your Hi-Fi equipment concentrated onto a small area, the weight per square unit area increases enormously, providing better contact with the surface on which the unit stands. Resulting in an overall improved sound stage and increased control in the lower frequency register. In addition, Soundcare® SuperSpikes reduce disturbing vibrations and prevent low-frequency noise from transmitting to other rooms. A Soundcare® SuperSpike loaded with a weight of 12.5 kg produces a pressure of more than 6,200 kg pr. sq. cm!

Developed from a vast database of over one million visual data points, the deep-learning algorithm recognizes content quality. And the 3rd generation α9 AI processor removes noise and optimizes contrast and saturation. The result is crisp, higher quality visuals.

I have a fantastic system, which has taken me over four years to build. And I love the audio and video quality when listening and watching. It is an authentic cinema experience, and I am grateful for the help and support of Paul and his terrific cables throughout my journey.

If you have enjoyed reading ‘Fantastic audio cable’, please share with friends – thank you.