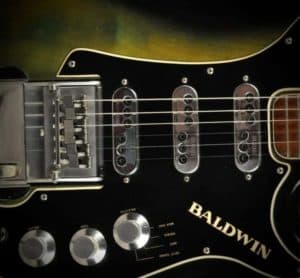 Electric guitar by BURNS. A British company called Burns Guitars made the very first electric guitar that I owned in England. And, the model was the Burns Jazz guitar. The guitar was Green burst in colour and had the most beautiful maple neck with amazing low action. And, even after all these years, I can still remember playing it!

I was a Shadows fan, and Hank was my hero, but I could not afford to buy a Fender Stratocaster as I was still at school. I had my paper round and a great mother, so this electric guitar by Burns was the next best thing. I can always remember how it sounded and how it felt, and I would play for hours getting Hanks tunes note-perfect!

I started by playing lead guitar and was very good. I played at the youth club, and then our group started to become famous, and we started playing in the pubs and clubs around the town. It was all great fun, and as we got older, we got better and became what was called semi-professional. It was just a step away from taking that plunge into the grown-up world, and we were so close, but due to many changes, never did take that step.

One day I decided to get a Bass guitar. I just do not know why I did, but my gut feeling told me that I had to have a bass guitar. As I loved my Jazz guitar, I decided to keep with Burns and bought a Burns NuSonic bass guitar. I enjoyed the transaction but felt that this guitar was not giving me what I wanted as my style had changed, and I thought that I wanted something different. 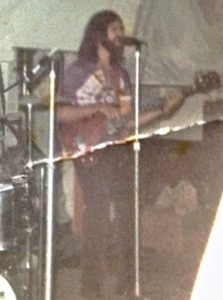 My feelings took me over to an American guitar made by a company called Gibson, and the guitar that I bought was a Gibson EBO short scale. I was very much into the music style of Jack Bruce who played with Eric Clapton and Ginger Baker in the group “Cream”, and so I was trying to follow Jack and his style of playing.

The Gibson EBO was an incredible guitar to play because of the short scale neck, And, in some ways similar to the Burns with regards action. Still, it was just so much better in the sound and with the double Marshall stack that I used, I was able to shake down the house if it became necessary.

I also switched from Marshall amplification over to “Orange” amplification, and the reason I did this was exciting. I was in London and looking to buy a set of “Rotosound” strings because I found them to give me the best sound for my bass.

I just happened to go into a small music shop called “Orange music” and got chatting with Cliff Cooper who asked if I had ever heard of his amplifiers. I said no, I was using Marshall, but I was always willing to try something new.

Cliff was one of the most excellent guys that I have met, and we got on very well together as I knew he was like me and simply wanted the best sound that you could, and I was all for his way of thinking. I decided to buy and told Cliff that I would be down next week with our van, but when we came back, we took much more than Cliff thought we would.

This because of the fantastic sound of his amplifiers. We returned on several occasions, as we became right customers and one day Cliff me out for a drive in a Silver Shadow that he had just bought as we both had a passion for cars. That was a great day as we drove around central London and something that I will never forget. I will also never forget the Orange sound and also how I loved to show the bright orange cabinets off on the stage! 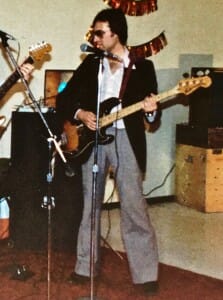 It is strange sometimes how the things in your life change and your styles change, and it seemed like it was time for me to change from the Gibson bass guitar over to a Fender bass guitar. I decided that I wanted to try a Fender Precision and so that is what I did.

The sound was just so different, and the playing style again was so different, but I got used to it and started to get the urge to get a six-string guitar also. Why did I have the desire? Well, I do not know, but I ended up with a Fender Stratocaster.

The Fender Stratocaster had been my dream guitar many years ago, but now I owned one, I somehow thought about my Burns Jazz guitar, and so I decided to see if I could find a burns guitar for sale.

I searched for many months trying to find an excellent Electric guitar made by Burns. I was unable to find a Burns Jazz, but I was able to find a very lovely Burns Marquee made in 2002.

This guitar was built in Korea and is a beautiful guitar. It reminds me so much of the Jazz guitar and is even the same colour. The action is fantastic, the neck is gorgeous, and the guitar is lovely to look it is unmarked and has been kept in a case all its life. I bought the guitar to use, so it does have a few small marks now but then so do I

It is so strange how in life we start with one thing and then chop and change but end up with what we first started. And, maybe the way we find out what is best for us but can also become a costly lesson for us and the question asked is always Why?

I also have bought another two Burns guitars that were made recently in China. They are the Burns Apache and the Burns Marvin.

These two guitars are very friendly and well built, but I am sorry to say that I have let them go, as I prefer the Marquee in every way. Also, I am making very hi-quality guitar cables which certainly bring your guitar to life!

If you have enjoyed ‘Electric guitar by Burns’, please share with friends – thank you.