Bass Tannoy Edinburgh and Bass is always a problem in the audiophile world. And this is why I have written this Audiophile bass Tannoy Edinburgh article. A true story, and all part of the learning curve. Know from experience how hard getting the correct amount of bass.  And, the excellent sound from the Tannoy Edinburgh. There is either too little bass or not quite enough bass. And a problem to get it just right.

I am a colossal Tannoy Fan and have been most of my life. I did try a pair of Focal ‘Divers’ for a year but switched back to Tannoy. During my life, I have owned many different models of Tannoy loudspeakers because they are simply the best!

For your interest, I do prefer the sound of the older Tannoy.  As opposed to the sound of the KIngdom royals. Why is this, you may ask? But, hard to explain as I think a lot has to to do with age!

The picture at the top of the page is Edinburgh’s that I am writing this ‘Audiophile bass Edinburgh’ article. Purchased from a colleague in the, UK, but when setting up, I was not happy with the sound.

Many of my friends have other models from Tannoy, which all have their sound. But most of my friend’s sounded much better these Edinburgh’s. And so I had to do something. 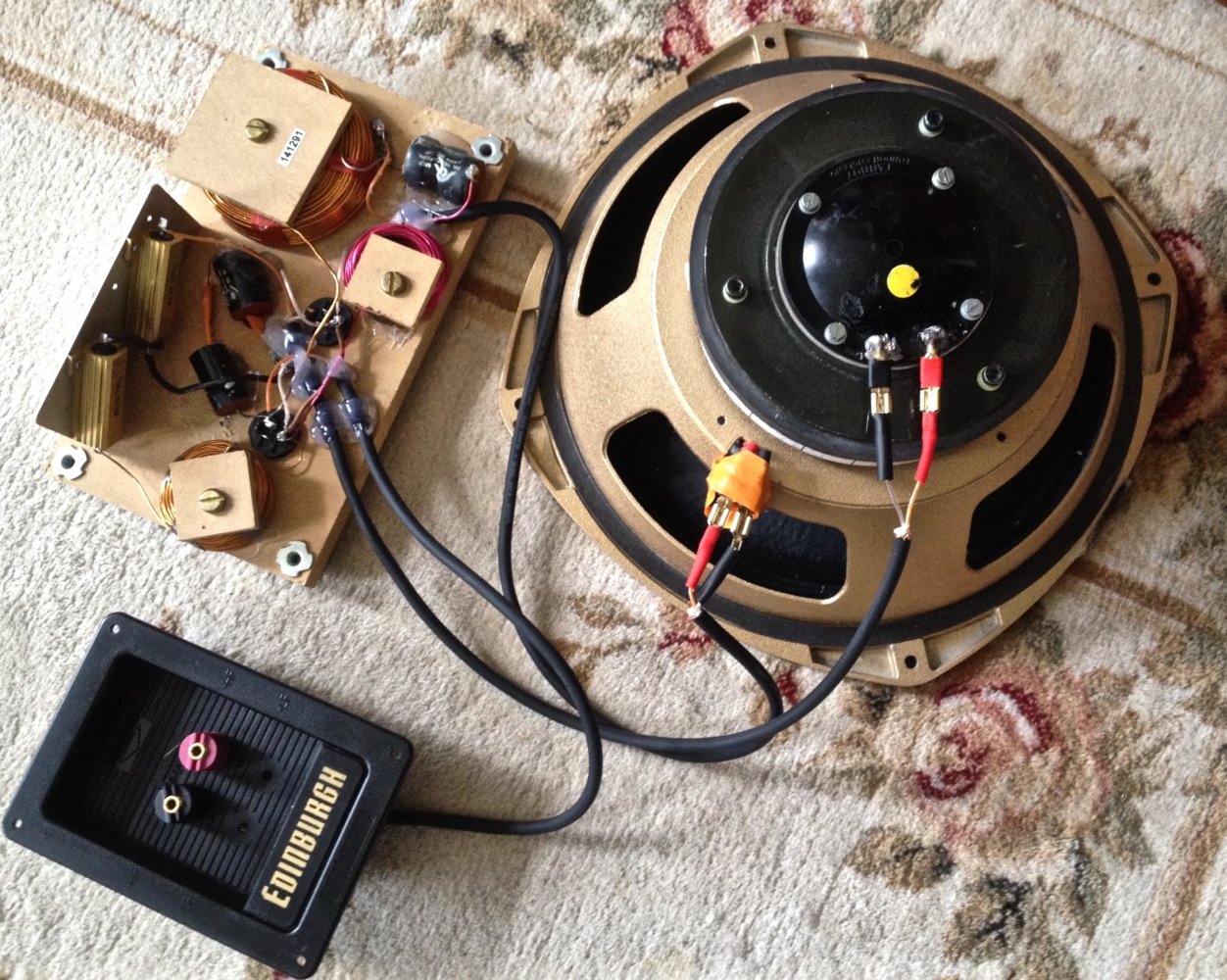 The Tannoy 3149 12″ driver fitted to the Edinburgh enclosures. The driver came with its Tannoy crossover, and I felt this was indeed the problem.

Tannoy supplied a crossover which was first order HF and first-order LF.  The crossover set at 1200 Hz. The frequency response of the driver was 28 Hz to 25Khz with a sensitivity of 94db.

I planned to find three different crossovers and compare them with the original Tannoy crossover and see if I could improve my sound in any way. 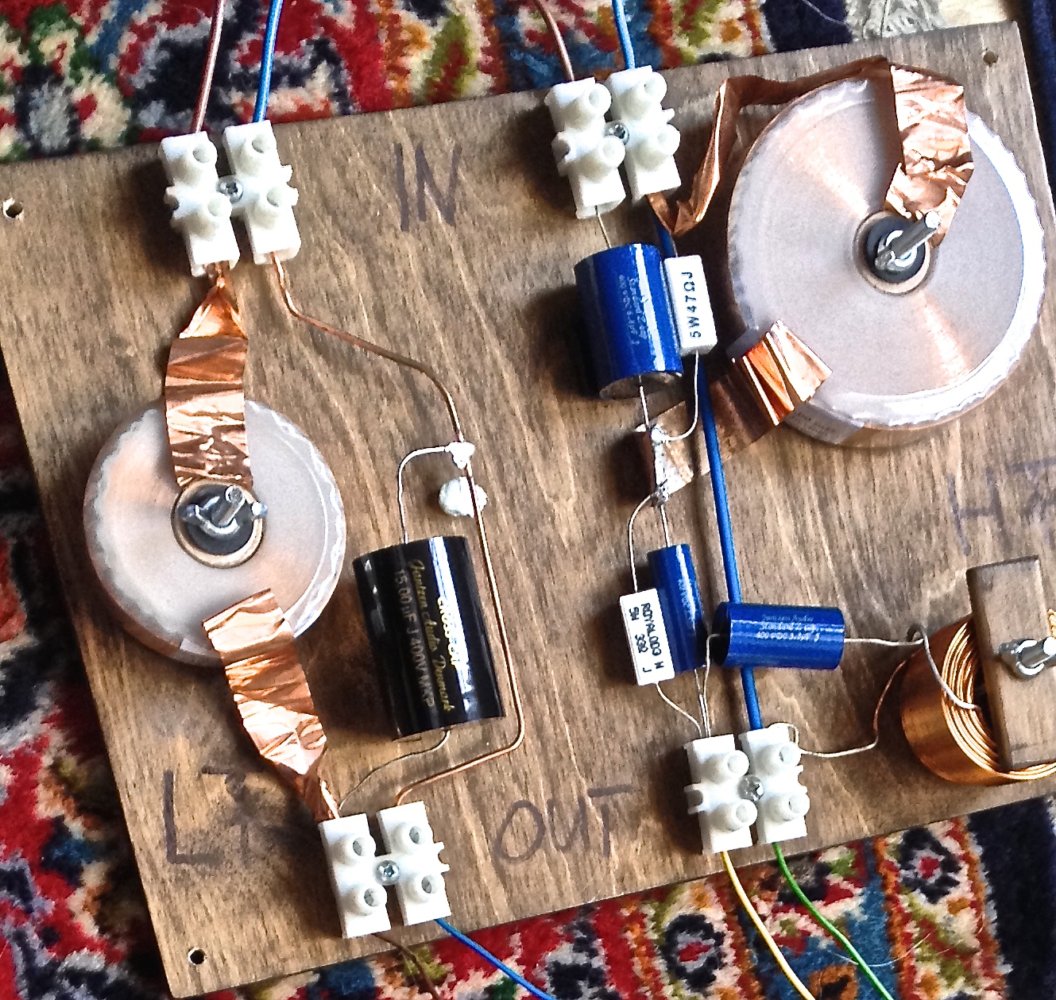 The first crossover I found (which seemed to fit the bill) was from a gentleman who lived in Romania. I saw this on eBay UK and exchanged a dozen emails with the owner. We got on very well and went ahead with the purchase which arrived a week later.

The crossovers were hand-built using high-quality components and crossed over at about 1K. I was delighted with my purchase and excited to hear the results. I could hardly wait to turn on my amp. Unfortunately, the crossover did not make much of a difference. And, did not do what I have expected. I wanted more bass, but it was still lacking, and so the search for a better crossover continued. 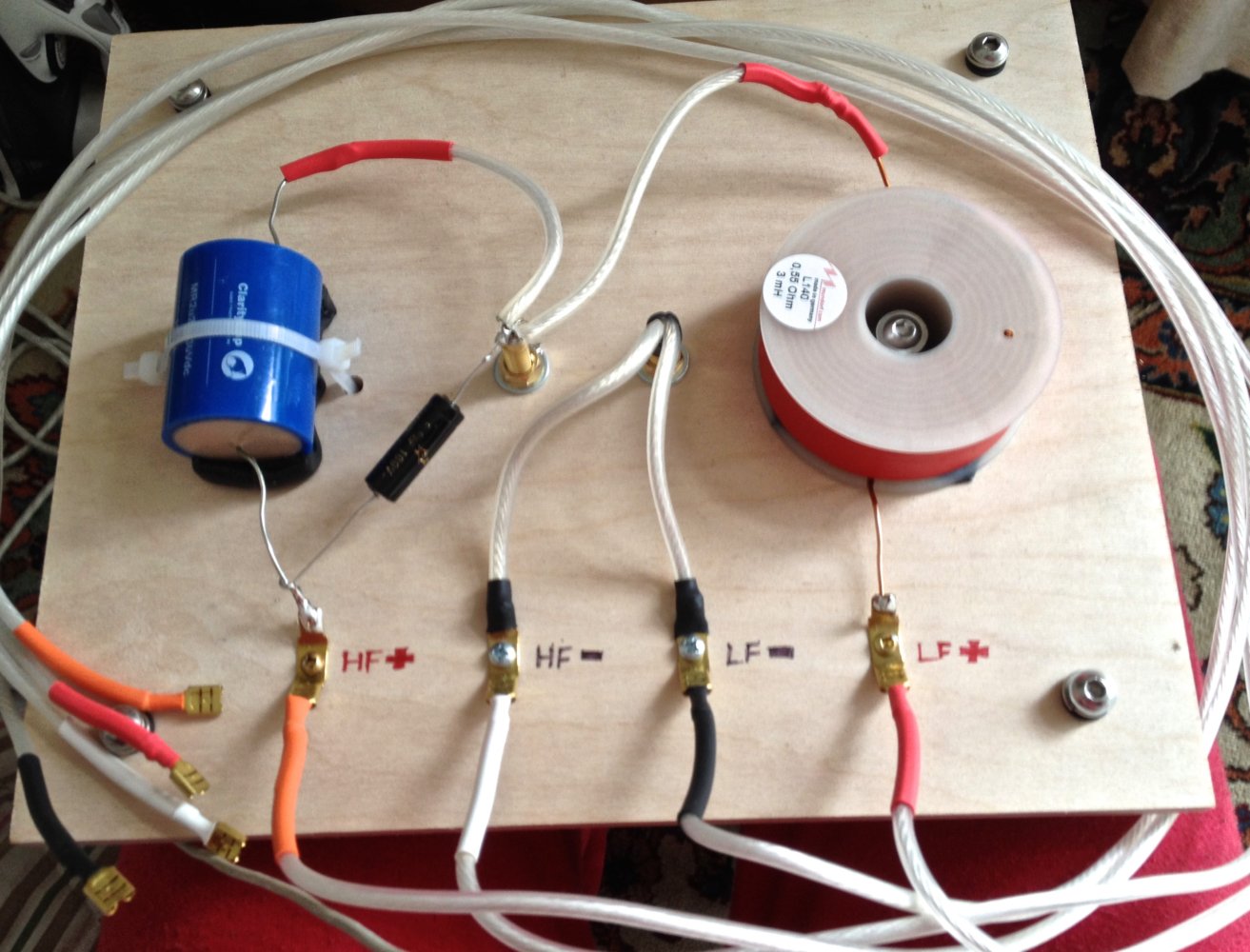 I bought this crossover from a Tannoy expert in London. It came from a friend of a friend and made for me. And, was a straightforward crossover and components used were the best of the best. Even the cables were pure silver and built to a certain length. At this time, I was using these crossovers for a pair of Tannoy 3811 filled into GRF cabinets.

The components used were Clarity Caps and Mundorf Inductors that crossed over at 1.2Khz. This crossover designed to work with the Tannoy 3811 (which are 15″), but I thought I would like them with the Edinburgh’s.

The quality of the sound was now entirely in a different league—absolutely crystal clear sound and far better than the Tannoy crossover that came with the Edinburgh’s. But unfortunately, the bass was still lacking. The bass was not lacking by much, but I always wanted more, especially in the lower regions. I wanted to sit and feel the bass. It was, running up from the floor through my legs and into the pit of my stomach!

I was determined to get the bass to sound the way I wanted, and so my search continued.  Searching again on eBay UK I was able to find a well know and respected Audiophile who operates under the name “Mainly Tannoy”. And, a company who has been in business for many years and have vast experience in sourcing components. Mark supplies professional Tannoy crossovers and parts as well as his custom crossovers. 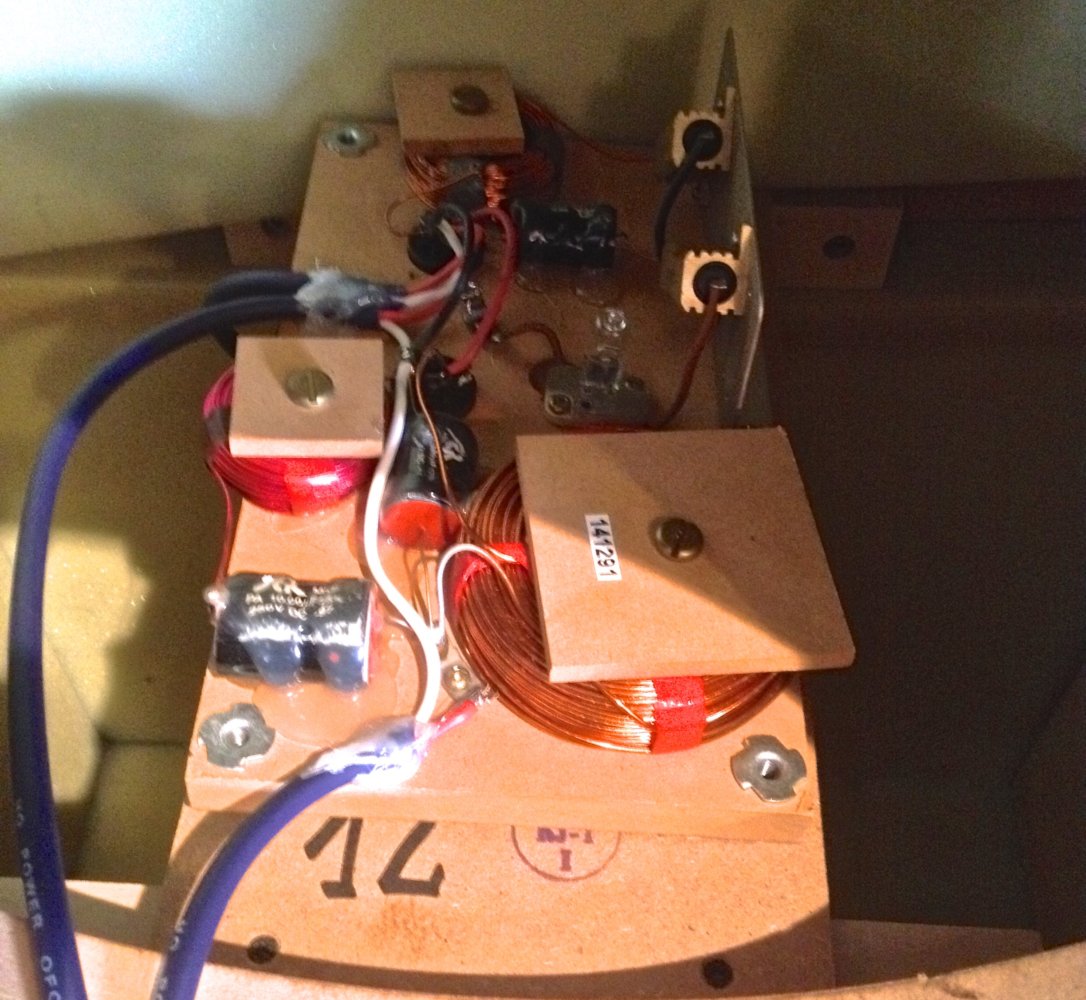 The crossover I received was from the Tannoy professional series. The sound was excellent indeed but unfortunately did not have the intense clarity of the number two crossover. (my custom made crossover)

I decided to ‘take the bull by the horns’ as they say. Out of storage came my old soldering iron as I decided to make a few of my mods to this crossover. The iron warmed up and with Iron in hand away, I went to do the business! I removed a few of the components and installed the crossover into the enclosures.

The modifications performed in my friends listening room. My friend is a doctor and has a pair of Tannoy Autographs fitted with 15″ monitor Golds. These are a merely unique sounding pair of Tannoys and a joy to listen.

As you can see the Edinburgh’s look rather humble next to the Autographs, but it was the sound that we wanted to hear.

There is an old saying “Third time lucky”, and this certainly was the case. We had everything set, and we’re playing our favourite test track through the Autographs. It was now time to hear what the Edinburgh’s sounded like with their new modified crossovers.

I connected the cables, and the music played. It only took a few bars, but we were both in 100% agreement. Edinburgh’s sounded fantastic. They had the clarity in the upper regions plus the middle tones and the excellent bass.

OMG, what an incredible sounding bass it was. Everything you could imagine was there, and the sound was so close to the Autographs; it was a shock for both of us. The best sound that I had ever heard from Edinburgh’s, and it gave me such a pleasure that I was able to make it happen.

If ever, anybody says to me ‘Edinburgh’s are no good because they have no Bass’ I will stand up and tell my story.

The question is this – why did the Edinburgh sound not so good with the factory crossover fitted to them? And why did I have to go through all this is get the sound I wanted?

If you have enjoyed ‘Audiophile bass Tannoy Edinburgh’, please share – thank you.